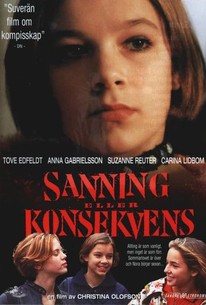 In this Swedish film with semi-autobiographical elements from director Christina Olofson (Lines from the Heart), Nora (Tove Edfeldt) begins a new class at school, hoping for acceptance from the popular Fanny (Anna Bagrielsson) and Sabina (Emelina Lindberg-Filippopoulou), while overweight Karin (Alexandra Dahlstrom), bullied by the schoolgirls, attempts to become friends with Nora. After Fanny's stereo is stolen by Nora, Karin is accused, and Nora joins the group planning to punish Karin. Shown at the 1997 Haugesund Film Festival. ~ Bhob Stewart, Rovi

There are no critic reviews yet for Sanning eller konsekvens (Truth or Dare). Keep checking Rotten Tomatoes for updates!

There are no featured reviews for Sanning eller konsekvens (Truth or Dare) at this time.