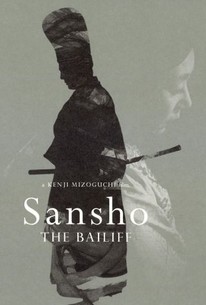 Set in 11th-century Japan, this film tells the story of a family that is broken apart when the father is exiled. When the mother and children set out to look for him, they are ambushed by kidnappers who sell the mother as a prostitute and the two children as slaves.

Ichiro Sugai
as Minister of Justice

Masahiko Tsugawa
as Zushio as a Boy

Naoki Fujiwara
as Zushio as an Infant

Keiko Enami
as Anju as a Girl

Ryonosuke Azuma
as Manager of a Brothel

Teruko Omi
as The Other Nakagimi
View All

At some point during the watching, "Sansho the Bailiff" stops being a fable or a narrative and starts being a lament, and by that time it is happening to us as few films do.

Every cut threatens to swallow a galaxy.

Saddening, revelatory, and provides no comic relief, but it's well worth the ride.

a film of surpassing, transcendent wisdom and beauty.

It illuminates the human condition and gives you plenty of time to think. It is the nature of nature to show no mercy, but mercy is inherent to the nature of human beings, even when it seems buried under loads of suffering.

Mizoguchi is the poet laureate of Japanese cinema, gracefully exploring the battered but resilient souls in the cruel worlds of Japan's feudal past and present.

A richly layered masterpiece, Sanshô the Bailiff deserves a spot near the highest pantheon of world cinema.

an exceptional film, telling its complicated story in simple images, and creating order from the worst kind of moral chaos.

You are well aware at every moment that you are watching something that has been assembled with utmost precision.

Serious as a heart attack and so emotionally wrenching that it's almost difficult to watch.

One of the greatest accomplishments in the history of film, concerning a family torn apart after the father, a governor, is exiled due to sticking to his morals, and how the rest of his family is sold into slavery and prostitution after attempting to find him. A damning display of slavery and a heroic tale of perseverance, there isn't an inch of pretentiousness to 'Sansho', more so a delicate simplicity that makes its points very well and never loses focus on its overarching message of honesty and integrity are two of the most important traits we as humans should possess. Almost unbearable to watch at times just because of how disturbing the conditions these slaves have to work under are, but there is always a ray of light at the end of the tunnel that takes form in the second half of the film with splendid, moving results. A dynamite, important film.

Kenji Mizoguchi's 1954 film "Sansho the Bailiff" is positively Dickensian in it's measure of human suffering, although it is apparently an old japanese fable about the virtues of mercy and compassion. When the governor of a province refuses to crack down and execute some protestors, he and his family are exiled. His wife and children are separated from him, and on their way to re-join the father they are abducted by slave traders and sold into slavery. The mother is sold to a brothel and the brother and sister are sold to Sansho the bailiff, who is overseer of the mansion belonging to the Minister of the right. Conditions for slaves there are deplorable, but the children must bide their time if they ever want to escape back to their parents. The story is quite a tear-jerker, and undoubtably a crowd pleaser with it's injustices being shown up in the end by the virtues of compassion and mercy. It's quite poignant to say the least (and I'm sure if Charles Dickens were asian and alive in the 1950s, I'm sure he'd say the same thing).

Sure it is a simple "folky" tale...and sure some of acting is a bit over the top at times (looking at you Zushio) but Mizoguchi tells (and shoots) it in a way that you can not help but enjoy.