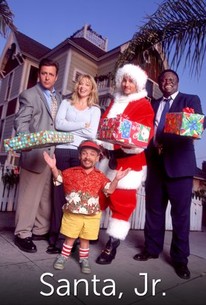 The title character in this made-for-cable comedy is a youthful slacker (Nick Stabile) who has long been a source of disappointment and embarrassment for his famous jolly-old-elf father. Anxious to prove his worth, Nick (as our hero is known) decides to clamber down a few chimneys just prior to Christmas Eve. Alas, his efforts coincide with a string of burglaries, and Nick is promptly arrested by cops Daryl Bedford (Judd Nelson) and Norm Potter (George Wallace). As Nick frets away the hours before Christmas under house arrest, Bedford grows attached to Nick's court-appointed attorney, Susan Flynn (Lauren Holly) -- and inevitably, the real burglar strikes again. Santa Jr. was first telecast over the Hallmark Channel on November 30, 2002.

Ed Gale
as Stan the Elf

Trevor David
as Bernard
View All

There are no critic reviews yet for Santa, Jr.. Keep checking Rotten Tomatoes for updates!

There are no featured reviews for Santa, Jr. at this time.