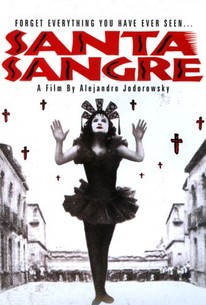 Critics Consensus: Those unfamiliar with Alejandro Jodorowsky's style may find it overwhelming, but Santa Sangre is a provocative psychedelic journey featuring the director's signature touches of violence, vulgarity, and an oddly personal moral center.

Critics Consensus: Those unfamiliar with Alejandro Jodorowsky's style may find it overwhelming, but Santa Sangre is a provocative psychedelic journey featuring the director's signature touches of violence, vulgarity, and an oddly personal moral center.

Critic Consensus: Those unfamiliar with Alejandro Jodorowsky's style may find it overwhelming, but Santa Sangre is a provocative psychedelic journey featuring the director's signature touches of violence, vulgarity, and an oddly personal moral center.

Santa Sangre is the surreal horror story about a young man, Fenix (Axel Jodorowsky) who has grown up in a circus with his mother Concha (Blanca Guerra) and his philandering father. Fenix witnesses a brutal fight between his mother and father, at the end of which his mother loses both of her arms and his father commits suicide. Fenix spends years in an insane asylum, before his mother persuades him to act as her hands in her bizarre nightclub act. Soon, Concha is having Fenix perform a variety of murders, where he is killing every female in sight. Though the film has some of the hallucinatory qualities of Jodorowsky's earlier films, Santa Sangre doesn't quite have the same punch, particularly in terms of cerebral and emotional impact, despite its fine visuals. Santa Sangre is available in both R-rated and NC-17 edits.

You can say this: It is never boring.

Santa Sangre's content puts it beyond the call of duty for even the most slavishly devoted art-house denizen.

What Jodorowsky lacks is a sense of humor, in the absence of which his films turn ludicrous.

Drawing on his training in mime and his fascination with Gnosticism, Jodorowsky converted a story about a bizarre murderer into a grand work of art, full of symbols and imagery that reach beyond language to something primal and original.

Visionary and haunting, Santa Sangre is a mixture of blood poetry and gobbledygook that keeps springing astonishingly to life.

Not as good as his previous El Topo, but pretty eye-opening all the same.

The love child of Luis Buñuel and Federico Fellini (with a [****] by David Lynch for good measure).

It just seems timeless. It's a beautiful story and... it's so powerful and you can tell how much passion and love went into this film.

A trip that was calculated carefully, the near constant use of slightly off-key circus music adding to its hypnotic quality.

While it's not especially easy viewing, and unquestionably not for all tastes, Santa Sangre is exhilarating, challenging, enigmatic and distressing, but entirely rewarding and entertaining.

A new favorite of mine.

In between hallucinations a young man kills at the telepathic command of his armless mother. Jodoworsky's takes a stab at making a surrrealist slasher flick, and the result is his most accessible film.

Set in the world of travelling-circus sideshows, Santa Sangre already promises us circus-midgets, freaks and mutilations. And if the plot isn't strange enough, Jodorowsky decides to throw in an elephant burial, a Temple of Blood, some naked zombie-bride, a fat hooker doing the tango, and a field trip to the redlight district sponsored by the insane asylum. Not quite on par with El Topo or Holy Mountain, Santa Sangre is a linear story that will burn images into your mind for days to come.