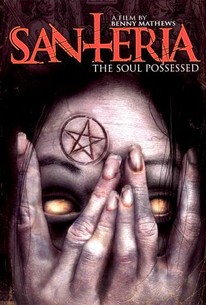 A nine-year-old boy who has just received a phantom Eucharist, his horrified cousin, and his religious aunt are trapped in their home by a sadistic phantom force in director Benny Mathews' unrelenting tale of supernatural terror. Despite the intention of the sacrament to keep the young child safe from the malevolent forces of evil, the powers of faith fail when young Ricky Banda and his two family members find themselves stalked by a dark entity intent on claiming their souls for the damned. When the morning sun rises to ward off the powerful force that had descended upon their once-happy home, only one of the three will emerge to tell the tale of what truly happened that fateful night.

There are no critic reviews yet for Santeria. Keep checking Rotten Tomatoes for updates!

There are no featured audience reviews yet. Click the link below to see what others say about Santeria!