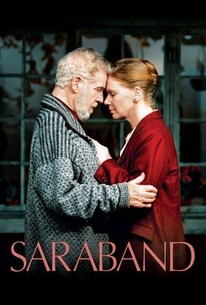 Critics Consensus: If Saraband appears to be a minor entry in Ingmar Bergman's filmography, it's still an accomplished piece of work from one of cinema's greatest masters.

Critics Consensus: If Saraband appears to be a minor entry in Ingmar Bergman's filmography, it's still an accomplished piece of work from one of cinema's greatest masters.

Critic Consensus: If Saraband appears to be a minor entry in Ingmar Bergman's filmography, it's still an accomplished piece of work from one of cinema's greatest masters.

Marianne and Johan meet again after 30 years without contact, when Marianne suddenly feels a need to see her ex-husband again. She decides to visit Johan at his old summerhouse in the western province of Dalarna. And so, one beautiful autumn day, there she is, beside his reclining chair, waking him with a light kiss. Also living at the summerhouse are Johan's son Henrik and Henrik's daughter Karin. Henrik is giving his daughter cello lessons and already sees her future as staked out. Relations between father and son are very strained, but both are protective of Karin. They are all still mourning Anna, Henrik's much-loved wife, who died two years ago, yet who, in many ways, remains present among them. Marianne soon realizes that things are not all as they should be, and she finds herself unwillingly drawn into a complicated and upsetting power struggle.

Saraband is a commandingly restrained final composition and -- as the theme of classical musicianship suggests -- very much an affair of close attention to the nuances of performance.

With Saraband, the great writer-director has stepped back into the ring for one last epic wrestle with his demons. There is, as always, no easy outcome. But no one ever fought for higher emotional and spiritual stakes.

A parlour-room theatre of emotional cruelty, with all exits barred by the past.

Insightful as ever but a little dated in the set-up and treatment of the shooting.

While bringing an abundance of inspiration to this world, Bergman unapologetically refused to ignore the pain and darkness that infects mankind. There will never be another filmmaker like him.

Even if it is, as he claims, his last film, Saraband will be a testament to Bergman's skill as a filmmaker, still a creative force to be reckoned with after 60-plus years in the business.

Certainly Bergman is what he is: the great man, with almost countless films to his credit.

It is existential gruel, ten portions of misery handed down from the master. Compelling and intense, it is also pitiless.

Bergman has a sharp talent for observing human conflicts without claiming to fully understand them.

So many great directors seem to go out with a whimper. Ingmar Bergman has gone out with a bang.

We find [Bergman]at 87, sifting through his pictures, wondering at the choices he's made.

It goes without saying that Saraband doesn't make for light hearted viewing. But this is a powerful, emotional family drama that can happily rank with some of Bergman's best work.

Late Bergman that wasn't quite as well received as his earlier films. I liked it though. We still have very profound relationships to explore.

[font=Century Gothic]"Saraband", written and directed by Ingmar Bergman, takes place thirty years after the events of "Scenes from a Marriage".(But it is not essential that you see the earlier movie to watch "Saraband.") Once married, Johan(Erland Josephson) and Marianne(Liv Ullmann) have not seen each other in the interim when she decides on a whim to visit him. Johan is now retired from being a professor because of an inheritance from an aunt and living in the country. His son, Henrik(Borje Ahlsedt), from a different marriage, and Henrik's daughter, Karin(Julia Dufvenius), live nearby physically but distant emotionally. Karin's saintly mother, Anna, died two years before. Henrik is an underemployed music professor while Karin is a 19-year old talented classical musician in need of professional training. It is the relationship between Karin and Henrik that takes center stage here.[/font] [font=Century Gothic][/font] [font=Century Gothic]Ingmar Bergman has not lightened up in his old age. "Saraband" is a chamber piece which is mostly about the damage parents can do to their children. The main flaw here is that there is no real resolution to the main conflict. The performances are of course all great.[/font] [font=Century Gothic]Note: I know a lot has been made of this being Ingmar Bergman's swan song. But this is the first appearance of Liv Ullmann, 66, in front of a camera in nearly ten years. So, I am wondering how many more movies will she be appearing in? [/font]