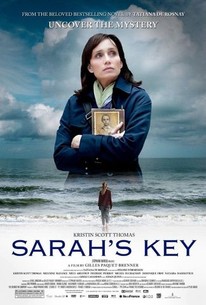 Julia Jarmond, an American journalist married to a Frenchman, is commissioned to write an article about the notorious Vel d'Hiv round up, which took place in Paris, in 1942. She stumbles upon a family secret which will link her forever to the destiny of a young Jewish girl, Sarah. Julia learns that the apartment she and her husband Bertrand plan to move into was acquired by Bertrand's family when its Jewish occupants were dispossessed and deported 60 years before. She resolves to find out what happened to the former occupants: Wladyslaw and Rywka Starzynski, parents of 10-year-old Sarah and four-year-old Michel. The more Julia discovers - especially about Sarah, the only member of the Starzynski family to survive - the more she uncovers about Bertrand's family, about France and, finally, herself. -- (C) Official Site

Pierre Nahori
as Policeman on Train

Stéphanie Gesnel
as Young Woman at the Window

Gérard Couchet
as Old Man at the Window

Thomas carries the weight of the movie, and her usual sangfroid works against her; when she finally makes contact with the deported couple's grandson, the story crumples into sentimentality

I'm delighted to see that the Weinstein Company is re-releasing one of the year's most overlooked films, Sarah's Key, the moving adaptation of Tatiana De Rosnay's international best-seller. It's one of the year's best films.

French director Paquet-Brenner occasionally yields to melodrama, particularly in the final act, but he is resolute about not depicting all of his countrymen as Nazi stooges, since many weren't.

Thomas' performance is one of brilliant restraint and believable naturalism.

Both Sarah and Julia emerge as distinct characters whose experiences are hardly comparable but whose perseverance in the face of daunting odds is most honorable.

Ultimately about the role of history in our lives and whether or not it must determine our future.

Unlock a magical movie experience this weekend with Sarah's Key

Is Sarah's Key designed to make French adults think about what their grandparents did in the war?... But if that's so, then why make a movie with the emotional intelligence of a child?

An emotionally wrenching story of survival and remembrance of things past.

The crumbs of happiness the filmmakers find to soothe us with are that learning Sarah's story helps Julia come to terms with her own problems, a neat resolution that trivializes the story the filmmakers mean to illuminate.

An American journalist in Paris embarks on a story about the Holocaust and discovers connections between the past, her present marriage and her unborn child. Beginning as an article on the 1942 roundup of Jews in France as they were sent off to Auschwitz, it soon becomes a journey of self-discovery as the protagonist stumbles upon a terrible secret of a family forced out of their home and a young girl called Sarah who makes an impulsive decision to leave her younger brother locked in a cupboard. A film about the Holocaust is certain to be moving, but the circumstances in this one are harrowing, the truth astonishing, and the coincidences as unbelievable as the tragedy itself. It is a journalist's quest to dig up the lives of others and unleash the truth, but this film show the price of these actions. Sarah's Key takes us from Paris to Brooklyn to Florence and ultimately to the centre of the heart - showing that even the truth has its cost. And the sadness, as much as we try to unlock it, can never be erased. 5 stars 10-17-13

Great. Thought provoking. Well done. Perfect mix of the heart wrenching events of lives torn apart, the endless search of who we are, and the depths of depravity that mankind is capable of. Just when I think that I have seen every Holocaust movie around, another pops up. I can never learn enough about this era that tested our humanity...

A fictional story built around historical facts and events, Sarah's Key is an incredibly well-made film which draws us in and never lets go. Even after it's over, the images and emotions linger in my mind. I've been thinking about it for days. Beautiful cinematography, amazing acting from the young actors, and a powerful emotional punch make Sarah's Key unmissable. Read the book first, but do not dare miss this film.