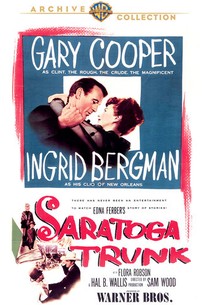 Ingrid Bergman and Gary Cooper paired off again after For Whom the Bell Tolls (1943) with this overwrought melodrama based on the romance novel by Edna Ferber. Bergman plays Clio Dulaine, a beautiful half-Creole woman whose return to 1875 New Orleans from Paris creates a stir. Born out of wedlock, Clio's mother was a local woman who became pregnant by a wealthy, married landowner. Scandalized, his wife and family set about humiliating Clio's mother and even paid for Clio's voyage to France in an effort to get rid of the girl. Now Clio returns with a dwarf, Cupidon (Jerry Austin), and a maid, Angelique (Florence Robson) in her entourage. At the docks, Clio meets a handsome gambler from Texas, Colonel Clint Maroon (Cooper) and is smitten. To Clio's delight, their blossoming romance inspires calumny, but Maroon soon realizes that Clio is a gold digger. He departs for Saratoga Springs, where he is working on a venture involving the railroad. Clio follows him there, bent on marrying either Clint or his business partner, Bart Van Steed (John Warburton). Saratoga Trunk (1945) was exhibited to servicemen overseas in WWII for two years before it was released to the general public.

William B. Davidson
as Mr. Stone

Alice Fleming
as Woman on Piazza

Monte Blue
as Fireman on Train

Sam Harris
as Gambler
View All

This romnatic melodrama, the second teaming of Gary Cooper and Ingrid Bergman, is not as good as For Whom the Bell Tolls, but it's mildly enjoyable and Oscar nominated Flora Robson steals every scene.

There are no featured audience reviews yet. Click the link below to see what others say about Saratoga Trunk!