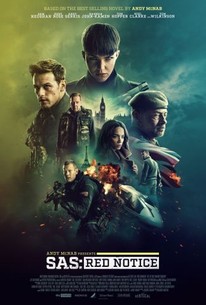 Critics Consensus: Whether it's called SAS: Red Notice or SAS: Rise of the Black Swan, this is a thoroughly mediocre action thriller.

Critic Consensus: Whether it's called SAS: Red Notice or SAS: Rise of the Black Swan, this is a thoroughly mediocre action thriller.

Tom Buckingham (SAM HEUGHAN), a special forces operator, is taking Dr. Sophie Hart from London to Paris to propose. When their train is deep inside the Channel Tunnel, Grace Lewis (RUBY ROSE) and her team of heavily armed war criminals seize the train and hold hundreds of passengers hostage. Grace threatens to expose the British governments darkest secrets and blow up the Channel Tunnel if her ransom demands are not met. Unarmed and cut off from his counter terror team, Tom is the only hope that Sophie and the other passengers have to make it out alive. Based on the best-selling novel by former SAS operator Andy McNab, SAS: RED NOTICE is a provocative and authentic portrayal of an emergency response operation and the singular mindset Tom needs to survive.

Sam Heughan is a strong action hero fighting terrorists on a train.

While not a travesty by any means, this premise has been done before and executed better.

This was a premise that just needed to lean in on its action hero DNA roots harder instead of trying to make a weak thinking man's spy thriller.

SAS: Red Notice is so close to being fun that it's a real shame to see it let down by a lousy script, lazy directing and enough army cliches to fill a dozen Call Of Duty cutscenes.

As a wannabe series or franchise-starter - McNab has two other books ready for adaptation - SAS: Red Notice will leave even the most diehard action fans feeling left out.

It's familiar territory, and while tried and tested, the film does lack a sense of originality.

While the direction by Magnus Martens is standard for this sort of action film, it's the script adapted from ex-SAS officer-turned-author Andy McNab's book that is surprisingly character-driven.

The action is second-rate, and Ruby Rose is an over-the-top villain, but it's amusing to see the film pander to America's idea of Britain: the hero is called Tom Buckingham and owns a stately home.

Undoubtedly, there's an audience for this kind of film - there's plenty of them - but all SAS: Red Notice offers is the routine, the predictable and the stereotypical.

The plot is both simple and overcomplicated, but lots of not always well explained detail cannot hide its derivative nature.

McNab writes pacy, exciting thrillers that offer perfect ammunition for screen adaptations but, in this instance, someone has loaded blanks.

This isn't the most memorable film, but it's a competent actioner that will satisfy anyone who enjoys gritty stories in which one good man goes up against a group of ruthless, well-prepared bad guys.

There are no featured reviews for SAS: Red Notice at this time.