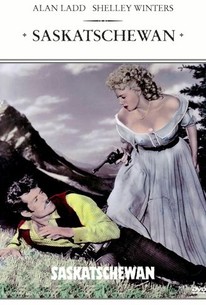 Saskatchewan is a "northern" starring Alan Ladd as tight-lipped Canadian Mountie Sgt. Thomas O'Rourke. He rescues Grace Markey (Shelley Winters), sole survivor of a Sioux uprising, and the two of them set out across the treacherous Saskatchewan terrain to safety. To keep himself and his companion alive, O'Rourke must rely on his own knowledge of Sioux behavior...not as daunting a task as it seems, since the Mountie was raised by Cree Indians. Along the way, the stoic O'Rourke melts enough to fall in love with Grace, who isn't as helpless as she seems at first glance. Saskatchewan is directed by Raoul Walsh in his usual virile and vigorous fashion.

Colorful western enhanced by being filmed on the actual locations. Curtiz moves things along at a good clip with Ladd solid in the lead. Shelley Winters is saucy and seems comfortable in period dress which is somewhat surprising for this most urban of actresses.