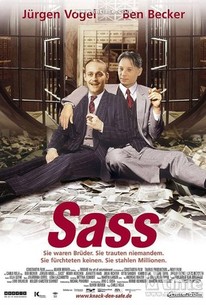 Based on the exploits of two criminal brothers who eluded the authorities as they embarked on an ever more daring series of complex robberies, director Carlo Rola's tense crime drama follows the brothers as they steal their way through the Berlin of the 1920s. As burglars and safecrackers, Franz and Erich Sass (Ben Becker and Jürgen Vogel) embark on a series of small robberies in order to elude the all-seeing eye of the taxman. As their crimes escalate to include a bank where the Nazi's keep their substantial funds, the authorities quickly begin closing in while Franz and Erich plan their final heist and grand getaway. ~ Jason Buchanan, Rovi

There are no critic reviews yet for Sass. Keep checking Rotten Tomatoes for updates!

There are no featured reviews for Sass at this time.