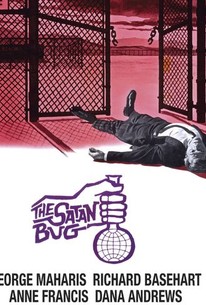 Alarms start flashing all the way from California to Washington when Station 3, a top-secret, ultra-high-security research facility, is broken into -- and a group of flasks containing two deadly viruses, one of them (nicknamed "The Satan Bug") possibly unstoppable, are stolen. Counter-intelligence specialist Lee Barrett (George Maharis) is called in to work with the regular security and intelligence personnel in determining who has the deadly substances, and why. Working with him is Ann (Anne Francis), an old flame and the daughter of the man (Dana Andrews) handling this on behalf of Washington -- working against them are a pair of psychopaths (Frank Sutton, Ed Asner) reporting to a mysterious financier, Charles Reynolds Ainsley, who has an agenda he's keeping secret for now. And the sidelines are populated by a group of flustered scientists (Richard Basehart, Simon Oakland, Harold Gould) and administrators (John Larkin, John Anderson), one of whom knows a lot more than he's telling about why the Satan Bug was stolen.

James Doohan
as Bit
View All

Critic Reviews for The Satan Bug

There is no talent in 'The Satan Bug' and there is a place for a clear mediocrity that tarnishes the entire film. [Full Review in Spanish]

The Satan Bug was a soft performer and has largely been forgotten over time, but it's a natural watch for audiences in the mood for intelligent fare.

The slow-moving film was dull from the get-go and never picked up any momentum.

Audience Reviews for The Satan Bug

There are no featured audience reviews yet. Click the link below to see what others say about The Satan Bug!