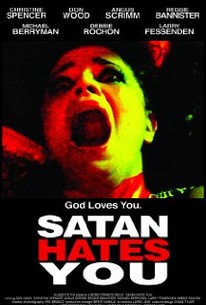 Inspired by films from the golden age of religious cinema such as A Thief in the Night (1972), If Footmen Tire You, What Will Horses Do? (1971) and Stalked (1969), Satan Hates You is a graphic horror film that tells the stories of two individuals and their personal struggles with Lucifer himself. We follow Marc (Don Wood) a homicidal maniac driven by demons buried deep within his soul, and Wendy (Christine Spencer) Marc's polar opposite who lives life fast and hard without a second's thought to the consequences. Their separate paths will eventually cross, but will it be on the road to salvation or the highway to hell? -- (C) Official Site

News & Interviews for Satan Hates You

View All Satan Hates You News

Critic Reviews for Satan Hates You

Satan Hates You is a clever collision of flamboyant gore and social commentary that never goes too far with anything save mordant wit.

Satan Hates You is self-conscious trash with occasional bite.

Satan may not hate us, but the film's writer and director, James Felix McKenney, surely does.

The film's one-note premise is only as fitfully affecting as watching caricatures hit rock bottom over and over again.

This strange dual-strand structure leaves the film feeling a bit aimless and unfocussed. But it's so luridly colourful and full-on that we can't stop watching.

A dull, disgusting and underwhelming semi-satire that's bold in its concepts, but neither scary, funny nor clever in its execution.

Audience Reviews for Satan Hates You

There are no featured audience reviews yet. Click the link below to see what others say about Satan Hates You!