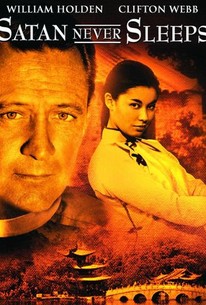 Director Leo McCarey returned to the religious themes of his classics Going My Way (1944) and The Bells of St. Mary's (1945) for this action drama, his final film. William Holden stars as Father O'Banion, a Catholic priest assigned to relieve the retiring Father Bovard (Clifton Webb) at a mission in China. Along the way, O'Banion has unwittingly picked up a follower with a crush on him, Siu Lan (France Nuyen). The girl becomes the mission's cook, but before Bovard can depart, Mao's 1949 communist takeover begins. Red soldiers led by Chung Ren (Robert Lee) seize the mission as their local command center. Chung Ren rapes Siu Lan, impregnating her, while O'Banion is forced to watch. Unable to cross China's closed borders, both priests remain at the mission, ministering to the locals despite harassment by Chung Ren. Delighted by his son's birth, Chung Ren begins undergoing a change of heart.

There are no critic reviews yet for Satan Never Sleeps. Keep checking Rotten Tomatoes for updates!

An uneasy mix of political and religious drama with some troubling messages and actions from the characters. One particular end result is actually head shakingly nonsensical and negates much of what has gone before. Most of the performances are good but Clifton Webb is especially fine in his last role, noble and vinegary as only he could be.