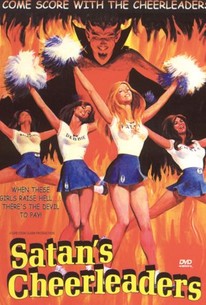 The cheerleaders of Benedict High are a rowdy, randy bunch with little regard for rules, decorum, or anything that gets in the way of a good time with the stud football players they date. The big game against Baker High is coming up, and the intense rivalry between the schools leads to spirited chicken fights on the beach and extensive T.P. sessions. The cheerleaders' chaperone, Ms. Johnson (Jacqueline Cole), tries hard to rally her charges and keep their restless libidos from distracting the star players, but they continually take advantage of her sweet nature and naïveté, leading to high jinks which get some of their boyfriends suspended from the team. However, high school politics will soon be the least of their troubles. Benedict High's creepy janitor, Billy (Jack Kruschen), is a member of a local Satanic group, and he wants revenge against all the kids who ridicule him on campus. He kidnaps the four cheerleaders and Ms. Johnson, then drives them to a remote location to sacrifice and ravage his victims on a Satanic altar. Suddenly overcome by the dark forces of the underworld, Patti (Kerry Sherman) strips naked of her own volition and climbs upon the altar, where she is imbued with a strange power that knocks Billy cold. The girls seek out the nearest law, which turns out to be Sherriff Bubb (John Ireland); he also doubles as the Satanic High Priest of the area. When his wife, Emma (Yvonne DeCarlo), senses the dark power that has invaded Patti, they decide that they have been delivered the perfect virgin sacrifice to their evil Lord. The girls make a hasty escape, but discover that the tiny town they've landed in is a hotbed of Satanism, so they are recaptured and brought once again before the devil's altar for a Black Mass. But which of these sassy, over-sexed girls is the virgin meant for sacrifice? The shocking answer leads to death, destruction, and a whole new way of life for the cheerleaders of Benedict High.

John Ireland
as The Sheriff

Jack Kruschen
as Billy the Janitor

John Carradine
as The Bum

While that may be asking a lot...if the one Lord can allow sinners to recant on their death bed, he should at least give this great, goony groove-a-thon a little dispensation

There are no featured audience reviews yet. Click the link below to see what others say about Satan's Cheerleaders!