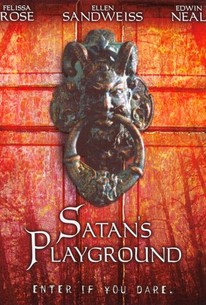 Writer/director Dante Tomaselli's horror picture Satan's Playground (2005) -- the filmmaker's third feature outing -- subverts horror expectations and genre clichés by deliberately suspending point-by-point logical threads, carefully steering around gore, and enlisting an acting ensemble not of teenagers, but of actors who are predominantly well into middle age. The picture involves the Bruno family -- siblings Donna (Felissa Rose) and Paula (Ellen Sandweiss), Donna's hubby, Frank (Salvatore Paul Piro), and autistic son, Sean (Danny Lopes), and newly single Paula's baby, Anthony -- who are en route to a vacation in the New Jersey Pine Barrens when their car gets stuck in the middle of nowhere. In an effort to solicit help, they inadvertently fall prey to a clan of white-trash, backwoods psychotics, while several are picked off, one at a time, by a strange, unknown predator from out of the night sky. Cast with veterans of the Texas Chainsaw Massacre and Evil Dead movies, Tomaselli pays loving tribute to slasher movies of cinema past.

A storybook fairy tale on acid.

... a dream world in which we are constantly pulled back just as we think we are at the brink of reaching reality.

An ambitious and surprisingly disturbing tale that's heavier on the thematic ideas than on the gore (which is admirably restrained).

It's aim is off, and its intentions are skewed. It's the result of a horror fan taking himself - and his film - way too seriously.

At the end of the day, Satan's Playground let me down, a fact that I attribute primarily to the bad acting, nonsensical storyline, and lack of an appearance by the monster.

There are no featured audience reviews yet. Click the link below to see what others say about Satan's Playground!