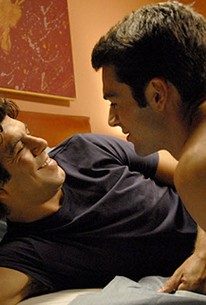 Turkish-born director Ferzan Ozpetek's meditative, character-driven ensemble drama Saturno Contro (a French-Italian-Turkish co-production, from a script co-authored by Ozpetek and Gianni Romoli) studies the interrelationships of a tightly-knit group of gay and straight friends, in the period surrounding the premature death of one young man and the split of a married hetero couple. At the story's center are Lorenzo (Luca Argentero), a confident, surreally handsome, 30-year-old Italian man, and his live-in lover, the author Davide (Pierfrancesco Favino. They spend their non-working hours with a colorful clique that includes: bright, spunky cocaine addict Roberta (Ambra Angiolini); husband-and-wife (and parents) Antonio (Stefano Accorsi) and Angelica (Margherita Buy); caustic Neval (Serra Yilmaz) and her husband, a cop (Filippo Timi); Davide's former lover, the acid-tongued Sergio (Ennio Fantastichini); and a new arrival to the group, Paolo. After Ozpetek and Romoli take time and care to introduce the characters, an unforeseen crisis arises: Lorenzo is rushed to the hospital, and dies. In time, his distanced father (Luigi Diberti) turns up, accompanied by his second wife, Minnie (Lunetta Savino) and still grappling with the knowledge of his son's homosexuality. Meanwhile, Antonio and Angelica split, the latter devastated by the sudden discovery of her husband's infidelity with a florist (Isabella Ferrari).

Critic Reviews for Saturn in Opposition

Ozpetek's direction rejects that structure completely to emphasize togetherness and resistance to change. It's an unusual filmic perspective. But why tell the story without providing the hook to become emotionally attached to these people?

Audience Reviews for Saturn in Opposition

There are no featured audience reviews yet. Click the link below to see what others say about Saturn in Opposition!