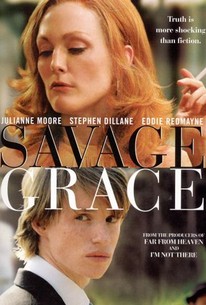 "Savage Grace" tells the incredible true story of Barbara Daly, who married above her class to Brooks Baekeland, the dashing heir to the Bakelite plastics fortune. Beautiful, red-headed and charismatic, Barbara is still no match for her well-bred husband. The birth of the couple's only child, Tony, rocks the uneasy balance in this marriage of extremes. Tony is a failure in his father's eyes. As he matures and becomes increasingly close to his lonely mother, the seeds for a tragedy of spectacular decadence are sown. Spanning 1946 to 1972, the film unfolds in six acts. The Baekelands' pursuit of social distinction and the glittering "good life" propels them across the globe. We follow their heady rise and tragic fall against the backdrop of New York, Paris, Cadaques, Mallorca and London.

Critical Consensus: Sex and the City Will Please Fans

While the pace occasionally flags and there are times when we wonder where Kalin is leading us, he maintains a pervasive sense of dread and unease throughout that makes the chilling climax seem both shocking and inevitable.

Savage Grace is a movie that badly wants to shock you. The only thing that might raise an eyebrow here, however, is the shocking rate at which everyone lights up a cigarette every five minutes.

A film as harsh, brittle and unbalanced as its characters.

Though the characters may be repellent, the film permits you to feel sympathy.

It's a horror story, all right, but the reason for telling it remains unclear, and it seems like a waste of Kalin's evident talent.

The film doesn't resonate with much or any of this, to its cost. It is too dry, too isolating, too passive. All in all, the makers of Savage Grace settled for far too little.

One of those classic morbid but elegant Vanity Fair articles. [Full review in Spanish]

Visually stunning and performance driven, Savage Grace has a carnal savagery that will ravage sensibilities and senses.

A poorly constructed, flaccid drama that treats complex emotional and psychological issues with all the depth of a particularly dull rock.

A spellbinding tale of luxury, incest, madness and matricide...

Ridiculous. An artsy-soapy drawing room study of bored contempt and idle peccadilloes amongst the 1950s-'60s-'70s jet set in Europe.

"Truth is more shocking than fiction." A dramatization of the shocking Barbara Daly Baekeland murder case, which happened in a posh London flat on Friday 17 November 1972. The bloody crime caused a stir on both sides of the Atlantic and remains one of the most memorable American Tragedies...

REVIEW
I always have some difficulty with films that are unashamedly brilliant yet difficult to watch. Not in the sense of mentally and artistically challenging (although Savage Grace does this) but in the sense of being downright unpleasant. The film follows the (true) story of a mismanaged inheritance, complicated by incest and matricide. It is a compelling character study of a young boy left with no sense of direction, no reliable role model and, in an atmosphere where he can seemingly want for nothing, having no-one whom he can trust. Julianne Moore plays the mother with all of her practiced skill, switching from heavily interiorised emotion to outbursts of rage. A complex character, she is desperately trying to find herself, to find some meaning in her existence. An existence where she constantly affirms a society role of being at the crest of a wave. The bisexuality of a man she trusts as a friend later becomes a factor that helps to sheer away her moorings. Savage Grace is a dark, dark film. For strong constitutions only.

Circling around Savage Grace is this insane self-contained vortex of almost inhuman behavior, a white trash atom bomb just barely held back at the seams by these delusions of class and nobility. Director Tom Kalin is this story's downfall; he doesn't know how to efficiently drip in these juicy little bits of drama and create a cohesive narrative at the same time, so what we end up with here is a tangential collection of really bizarre shocking scenes. This movie is nowhere near good. There are traces of absolute exquisiteness to be found in the writing, visual composition, and narrative, and Julianne Moore's performance is one of the bravest and most thoughtful she's given in years. Savage Grace is clearly a movie informed by some really sensational tidbits. The problem is they just don't come together to make anything worth championing. The movie is wildly entertaining trash dressed up real pretty, which renders it this awesomely self-aware yet bizarrely delusional piece of uniqueness. It really does have to be seen to be believed. The more I say about this experience, the more it will compromise it for you, as going into the movie with a clean slate will make the film all the more shocking and ribald and utterly hilarious. Anyway, there's nothing quite like this to be seen in 2008, and if you're a fan of Moore or just over-the-top drama this is a definite must. It's divisive and your mileage may vary, but I think everyone should give it a shot.

[size=3]"Savage Grace," which has a stunning cast led by [b]Julianne Moore[/b], is a complex, beautiful, dark film. It has its weaknesses, such as the tendency toward dramatic slackness in the first two-thirds. But it also has extraordinary strengths. The dramatic slackness, it should be said, is overcome in the final part of the film, and the audience is treated to one of the most shocking endings in cinema history.[/size] [size=3][img]http://img167.imageshack.us/img167/184/savagegrace2006cz8.jpg[/img][/size] [size=3]"Savage Grace" is also packed with ideas, most of which are troubling, and has some of the most accomplished direction and most soulful cinematography of 2008. It also is one of the most courageous fillms of the decade. Ms. Moore in particular must be commended for her willingness to take on a deeply disturbing role, doing things on screen with her body that will make your skin crawl. [/size] [img]http://www.fest21.com/files/images/SAVAGE%20GRACE.jpg[/img] [size=3]For a major movie star to do things like this on screen is nothing short of heroic. She's risking her career in the mainstream to commit to true art, deserving a medal for artistic integrity and bravery. Hollywood needs more stars like Julianne Moore.[/size] [size=3]"Savage Grace" is based on a nonfiction book about a man who ended up in prison. (I won't tell you why he was incarcerated.) The book focused on his family, in particular his relationship with his mother. A talented young actor named [b]Eddie Redmayne[/b] plays the son. Moore plays his mother and [b]Stephen Dillane[/b] his father. Dillane is just as impressive as Moore and Redmayne, incidentally. This cast is one of the great ensembles of 2008.[/size] [img]http://www.filmmakermagazine.com/spring2008/images/savagegrace_3.jpg[/img] [size=3]The film provides a guided tour of one of the most dysfunctional families in human history, and also one of the most interesting. So many horrific things occur in this family. I don't want to give away any of the bombshells, but to provide a glimpse: when the son gets his first girlfriend, his father ends up seducing the girl and sleeping with her. This is just one example of the spectacularly strange ways that this family works out its Oedipal drama.[/size] [size=3]To some degree the film also explores the general culture of the 1960s and 70s, specifically its experimentation and lack of concern for boundaries. But happily the film never for a second devolves into pat psychology. No character says things like, "You have no boundaries!" These characters, like most human beings, are completely buried in the subconscious and have no vantage point from which to conduct a self-analysis. The film doesn't try to provide this vantage point either. It just stands back and watches them go through their dramas. [/size] [img]http://www.canaltcm.com/myfiles/ap/savage-grace-klerfilms.jpg[/img] [size=3]There is immense food for thought for the audience. But "Savage Grace" doesn't take the lead in any particular analytical direction. The film simply depicts the characters' experiences, and the audience is on its own to form a critique.[/size] [size=3]At the screening I attended, director [b]Tom Kalin[/b] was in attendance. (Artistic theaters in Manhattan are outdoing themselves lately with in-theater visits from filmmakers. Every time I turn around another theater is advertising, "Meet the Filmmaker at the 8pm Show." I couldn't be more delighted.) [/size] [size=3]Kalin said that he was opposed to the idea of films making judgments, but he made clear that he made his own judgments, as a viewer of the film, if you will. It's always dangerous to paraphrase, but I think it's safe to say that Kalin finds the characters in "Savage Grace" immensely interesting but also horrendously disgusting. I would concur.[/size] [size=3]If the first two-thirds of the film were edited more sharply, I think "Savage Grace" would be getting more attention. Despite the powerhouse ending, I think most people walking out of the film have a hard time shaking the memory of 60 minutes of slackness. It's a shame, because there is an immense amount of artistry here. [/size]