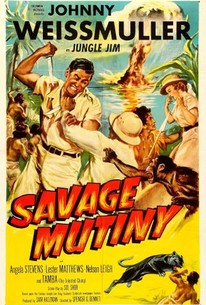 The tenth of Columbia's "Jungle Jim" series, Savage Mutiny finds Jim (Johnny Weissmuller) working on behalf of the US government. Jim must evacuate a tiny African island that is to be used for atomic testing. Scurrilous Communist agents hope to thwart America's defense program, and also stir up anti-US propaganda, by encouraging the natives to stay put. By the time Jungle Jim gets through with them, the spies would rather be dead than Red. Much of the footage of Savage Mutiny--and a good portion of the plot--would be re-used on an episode of TV's Captain Midnight.

Tamba the Chimp
as Tamba The Chimp
View All

There are no critic reviews yet for Savage Mutiny. Keep checking Rotten Tomatoes for updates!

There are no featured reviews for Savage Mutiny at this time.