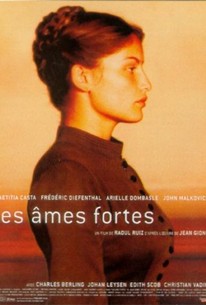 One woman's actions inspire a variety of reactions among those around her in this period drama. Therese (Laetitia Casta) and Firmin (Frédéric Diefenthal) are a young couple of modest means living in France in 1882. Firmin earns a living as a blacksmith, while Therese finds work at an inn. At the inn, Therese makes a point of making the acquaintance of Mme. Numance (Arielle Dombasle), a wealthy woman who is known for her compassion and eagerness to help those less fortunate. When Therese loses her job after getting pregnant, Mme. Numance takes pity on the young couple, and invites them to move into the estate she shares with her husband (John Malkovich). Therese and Mme. Numance become close friends, and before long the lady of the house has come to regard Therese more as a daughter than a guest. But some believe Therese might be using her friendship with Mme. Numance for her own gain, which in their eyes is confirmed when Therese borrows a large sum of money from her benefactors after Firmin develops legal trouble. Therese and Firmin are unable to pay back the Numances, and soon the wealthy couple falls on hard times; those watching these events unfold wonder if Therese deliberately brought the generous family to ruin, or if is it all a product of simple naïveté. Alexandre Astruc helped to adapt the screenplay for Les Ames Fortes, based on the novel by Jean Giono; Astruc was also set to direct the project at one point, but after his unexpected death, Raúl Ruiz stepped up to the director's chair.

Christian Vadim
as The Pastor

Monique Melinand
as Therese as an Old Woman

Carlos López
as The Mute

Edith Scob
as First Woman at the Wake

Jacqueline Staup
as Second Woman at the Wake

Frédéric Diefenthal
as Firmin
View All

A faltering and confused tale.

It is one of the filmmaker's weakest efforts, as his abstract style doesn't fare well on a film that demands a realistic approach.

Throughout the film, the relationship of Therese and Madame Numance has an intriguing ambiguity.

There are no featured reviews for Savage Souls (Les Âmes fortes) at this time.