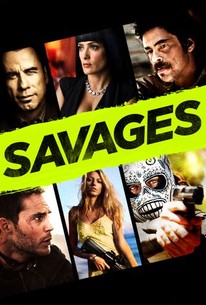 Laguna Beach entrepreneurs Ben (Johnson), a peaceful and charitable Buddhist, and his closest friend Chon (Kitsch), a former Navy SEAL and ex-mercenary, run a lucrative, homegrown industry-raising some of the best marijuana ever developed. They also share a one-of-a-kind love with the extraordinary beauty Ophelia (Lively). Life is idyllic in their Southern California town...until the Mexican Baja Cartel decides to move in and demands that the trio partners with them. When the merciless head of the BC, Elena (Hayek), and her brutal enforcer, Lado (Del Toro), underestimate the unbreakable bond among these three friends, Ben and Chon-with the reluctant, slippery assistance of a dirty DEA agent (Travolta)-wage a seemingly unwinnable war against the cartel. -- (C) Universal

Savages may come off choppy in the very beginning, but it does springboards to a really fantastical second half.

The film would have been so much more interesting if the two men had been identical twins played by the same actor-like Jeremy Irons in David Cronenberg's Dead Ringers.

Amid all the violence and profanity, Oliver Stone reveals a begrudging respect for his damned characters.

The messy insouciance wears a little thin, and by the time we get to the absurdity of the extended ending, enough is definitely enough.

The three leads are a bit on the bland side but perhaps that's the way California potheads are. Del Toro and Travolta are terrific in their more interesting roles.

Messy, violent, and often garish, but it's capably directed by Stone.

The film lends its characters some last-second self-awareness that it could have used itself, instead taking a viewpoint exemplified in O's narration, casually approaching a very frenetic life.

Savages all too often feels overly stylized, emotionally manipulative, and detached in the worst of ways.

"Savages" winds up a charade, almost a spoof of the kind of movie it claims to be. It wants to push buttons, it wants to incite debate, it wants to have something to say and be more important that it is. But there's nothing behind it.

It's gory, it's horribly flawed and it features some pretty bad acting, yet Savages is fun and exciting if you don't take any of it seriously.

Nothing in an Oliver Stone movie is ever subtle, and this one is no exception. But Kitsch, rebounding from two flops that were hardly his fault (John Carter, Battleship), proves his mettle with a tight-wound, fine-tuned performance.

Rather long, and rather involved...but I liked it. Definitely plenty of blood, sex, violence, and brutality. This IS an Oliver Stone movie, and his movies are not known for totally adhering to reality. This one included. Yes, some of the characters were somewhat over the top and exaggerated, but that's what Oliver Stone does. I am NOT a huge fan of his, but I think that he did a really good job on this one...

Salma Hayek is given a role that suits her (age-wise & acting-wise), but the lead actress was terrible. The two lead actors were about okay. The ending was nonsensical, although like many did, I didn't find the rest of the movie that incredible. A mediocre presentation by O.

Savages was a great thriller. I loved most of it. The actors are in a wide variety. I enjoyed that. There are some performances that were so, so and others that really stood out. The two male leads are drool worthy, but besides that, they did an awesome job in the movie. I love Taylor Kitsch and have bee a fan of his since his Friday Night Lights days. The ones who bothered me the most was Travolta and Hayek. I thought they both were over dramatic and cartoonish in their performance. Especially Travolta. Blake Lively is another one who bothered me. I have yet to see her in a role where she doesn't come off bored and uninterested. It's like she's just a pretty girl they put in the film to look at. She is forgetful and a boring actress who never brings any worth to the films she miraculously gets roles in. But besides those flaws, the film was actually pretty good. I thought it could have been tied up better at the end, but still a good film worth seeing.

"Savages" is a welcome return to appropriately lurid form for Oliver Stones. A whole lot of bloody, messy, and stylish fun can be found within the confines of it's bloated running time, just as long as you're willing to overlook a few obvious (but not deal breaking) flaws.