Save the Green Planet2004 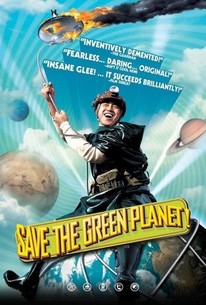 Critics Consensus: A funny and wildly inventive hybrid of various genres, Save the Green Planet! is definitely a unique viewing experience.

Critics Consensus: A funny and wildly inventive hybrid of various genres, Save the Green Planet! is definitely a unique viewing experience.

Critic Consensus: A funny and wildly inventive hybrid of various genres, Save the Green Planet! is definitely a unique viewing experience.

Save the Green Planet Photos

The genre-bending black comedy sci-fi thriller Save the Green Planet! marks the feature debut of writer/director Jang Jun-hwan. Shin Ha-kyun of Joint Security Area stars as Byun-gu, an eccentric beekeeper who, with the help of his tightrope walker girlfriend, Sooni (Hwang Jeong-min), kidnaps a powerful and successful businessman, Man-sik (Baek Yun-shik). Byun-gu believes that Man-sik is an alien from the planet Andromeda, one of many hiding among us and plotting to destroy the Earth in a few days. Amphetamine-popping Byun-gu sees himself as the planet's last hope, and sets about torturing Man-sik with relish, trying to convince him to contact the "Royal Prince" and call off Armageddon. A battle of wits and wills ensues, with Man-sik trying to convince his captors that he's human and attempting to escape. Man-sik recognizes Byun-gu as a disgruntled former employee whose comatose mother suffers from a mysterious illness. It begins to seem that Byun-gu's true motivation may be personal, but he's still ruthlessly determined to get Man-sik to confess and cooperate, even if he has to risk killing him. Meanwhile, a disheveled detective, Chu (Lee Jae-yong), and his young acolyte, Inspector Kim (Lee Ju-hyeon), discover that the person who kidnapped Man-sik may have struck several times before, always with deadly results. The distinctly offbeat Save the Green Planet! was a box-office flop in South Korea, but it won some acclaim on the festival circuit. The film had its U.S. premiere at the 2004 New York Korean Film Festival.

Critic Reviews for Save the Green Planet

Punk graphics and a snaking camera add zest to the story, which is alternately heartbreaking, suspenseful, and darkly funny.

The film oscillates between wild humour, suspense, horror and pathos, sometimes all in one shot. It's quite something.

Save The Green Planet has a free-ranging mood, mixing tragedy and comedy irregularly, but Jeong's film is equally free with genre, and entertains its audience openly before pouring on the astringent.

Like any roller-coaster ride, it may make you queasy, but you'll never be bored.

Additionally featuring a great finale, and a number of twists better left unsaid in this review, "Save the Green Planet" is a masterpiece curio, and at the same time, so much more.

Clearly designed to win a cult following, its "chuck everything, including the kitchen sink in" approach to weirdery treads a fine line between "endearingly bat's-arse" and "trying a bit too hard".

Save the Green Planet may look like an ironic, jet black comedy -- and it succeeds brilliantly on that level -- but in it's sad and wistful heart, it's a completely sincere call for saving the Earth.

Wrapped up in all this madness is an affecting human core.

Audience Reviews for Save the Green Planet

What a delight, A multi-genre film that successfully twists your emotions & thoughts, Not just some random images and actually an Impressive & thought-provoking experience

Save the Green Planet is a film that refuses to be defined by a single genre and goes against what you may have come to expect from cinema. It's true originality packaged in comfortable surroundings. The story may sound like a comedy but this is hard hitting, thought provoking and at times, difficult to watch. The film keeps us guessing as to whether the aliens exist, it's all the ravings of a madman, or maybe a bit of both. It deals with human nature in a frank and unsettling way. We are given a protagonist that we gradually become more and more distant from. The comedy is very dark but not so much that it isolates the viewer. One scene has a character shoot at a swarm of bees in a sad attempt stop them from attacking. The film laughs at this action by showing a couple of bees fall to the ground dead. This one moment sums up one of the main points of postponing the inevitable. To say what the film is truly about is to give away the ending. A film that demands another watch.

A disgruntled ex-factory worker kidnaps the CEO of his former employer, convinced that he is an evil alien out to destroy the world in one week's time. But then again, he could just be a delusional lunatic...This complete fruitloop of a film is unlike anything else you are going to see. For most of the film it's like a semi-comic version of Misery as Byung-gu sadistically tortures the man while a similarly oddball cop who's been demoted to kitchen duty tries to track him down. Then as a ploy to escape, his victim concocts a Usual Suspects style history of the planet consisting of every pop culture sci-fi story combined with pre-history, myth and religion. And then it just gets WEIRD! Starting off as a cross between Seven and Misery and ending up like The Hitchhiker's Guide To The Galaxy, this has got to be one of the best sci-fi-comedy-horror-serial killer movies I've seen....Totally hatstand.

Save the Green Planet Quotes