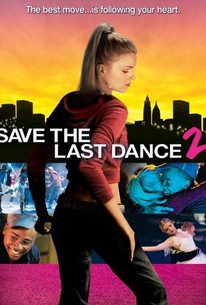 Save the Last Dance 2: Stepping Up Photos

As Sarah Johnson (Izabella Miko)'s ultimate dream of attending Julliard and becoming a professional ballerina begin to take roots in reality, her interest in the art of hip-hop dance threatens to sideline her education in this sequel to the popular 2001 dance drama. Sarah Johnson may be at Julliard, but her struggle to make a name for herself in the ultra-competitive world of dance is only beginning. Though her stern instructor and idol Monique Delacroix (Jacqueline Bisset) has generously taken young Isabelle under her wing, a guest lecturer named Miles (Columbus Short) causes the aspiring young dancer to question her priorities. Soon torn between the raw honesty of hip-hop dance and the respectable world of ballet, Sarah realizes that only she take hold of her fate and face the future with the confidence to succeed no matter which path she chooses.

Critic Reviews for Save the Last Dance 2: Stepping Up

No Stiles, but dance film's 2nd is still teen fun.

Audience Reviews for Save the Last Dance 2: Stepping Up

yes i watched it. yes it was terrible. it was actually better than the first which was one of the worst movies of all time, but this was still pretty bad.

Save the Last Dance 2: Stepping Up Quotes