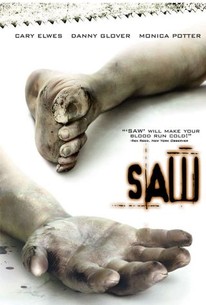 Critics Consensus: Saw ensnares audiences with a deceptively clever plot and a myriad of memorable, nasty set pieces, but its lofty ambitions are undercut by a nihilistic streak that feels more mean than profound.

Critics Consensus: Saw ensnares audiences with a deceptively clever plot and a myriad of memorable, nasty set pieces, but its lofty ambitions are undercut by a nihilistic streak that feels more mean than profound.

Critic Consensus: Saw ensnares audiences with a deceptively clever plot and a myriad of memorable, nasty set pieces, but its lofty ambitions are undercut by a nihilistic streak that feels more mean than profound.

The directorial debut from filmmaker James Wan, this psychological thriller comes from the first screenplay by actor Leigh Whannell, who also stars. Whannell plays Adam, one of two men chained up in a mysterious chamber. The other, Dr. Gordon (Cary Elwes), like Adam, has no idea how either of them got there. Neither of them are led to feel optimistic by the man lying between them dead of a self-inflicted gunshot wound. Together, Adam and Dr. Gordon attempt to piece together what has happened to them and who the sadistic madman behind their imprisonment is. Also starring Danny Glover and Monica Potter, Saw premiered at the 2004 Sundance Film Festival. ~ Matthew Tobey, Rovi

The 21 Masters Of Horror Shaping the Genre Right Now
How Good Are the Saw Movies When a Saw Is Actually Involved?
The Killer Body Count Guide

The sound of Jigsaw's gravely voice pouring out of the tape recorder is still as ominous a sound as one could imagine, and the big reveals still come as a genuine shock.

How such a cruelly empty and infantile movie got made is mystery enough. More puzzling is why Cary Elwes, Danny Glover and Monica Potter would sign on as co-stars.

James Wan's horror film Saw is full of demented twists and guilty-looking actors, but the scenario is cruel enough to make you squirm.

[A] contrived, unlovable gore-fest with a high-concept premise.

There's something impressively loathsome and extravagantly twisted about this horror-thriller from first-timer James Wan.

As a study in the macabre, it barely suffices; as a sick and bloody joke, it's bloody sick.

The original Saw may be rough round the edges, but that unvarnished quality has a sure charm that its more cynical successors lack.

A twist ending for the ages always helps a genre shine up good for the camera.

Say what you want about the acting or even the franchise as a whole, but Saw includes one of the most unforgettable endings that you won't see coming.

A gruesome, perverse and uncomfortably macabre movie that is also really ingenious and gripping when it comes to the twisted motivations behind the killer's deeds, and the film ends with one of the most surprising and unpredictable scenes I can remember.

Apart from the many plot holes, I think this is decent gore film.

A gritty, dirty, and intense horror movie with superb acting from Leigh Whannel and Cary Elwes as two men chained inside an abandoned bathroom, wondering how they got there and why they are here. This movie gets a lot of bad rep for ceaseless violence and excessive gore, and gets unfairly coupled with "Hostel" because of this. It is definitely violent and not for all, but in terms of how the simple story is given layers and handled meticulously with backstories and flashbacks, you can not deny it is a good idea handled exceptionally well. In my opinion this is one of the better horror films of the 00's, with a twist ending that will knock you out cold. The score is also phenomenal, as it continually amps up the intensity (especially in the final act) to almost unbearable levels. Highly recommended if you like horror films.

not a fan of the gore fest horror films that this movie started generating but this was a decent movie. The twist to me was slightly unrealistic as how could a man alive lay there that long and not move once or show breathing . . .