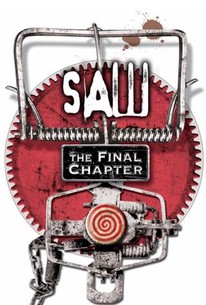 The Saw series continues with this seventh entry, spearheaded by returning Saw VI director Kevin Greutert. Marcus Dunstan and Patrick Melton also are back to pen the script, which details the exploits of serial killer Jigsaw's surviving victims, who seek counseling from a self-help mentor (Sean Patrick Flanery) whose past as a previous victim figures directly into each one's fate. Cary Elwes returns to the franchise for the first time since his character survived Jigsaw's first cinematic outing in 2004. ~ Jeremy Wheeler, Rovi

How Good Are the Saw Movies When a Saw Is Actually Involved?
The Killer Body Count Guide
Horror Movie Survivor Hall of Fame

It's the kitchen-sink chapter.

Fast-paced and straight-faced, and full of "ewwww!' moments that play up to the film's effectively cheesy use of 3D.

Saw 3D may just be the Saw-iest Saw film of them all.

Though the film hardly ends the series on a triumphant note, it still qualifies as one of the better entries.

Like a stumpy limb requiring quick cauterization via steam pipe (our first cringe), the Saw series is begging for closure.

It's only fair to point out that Saw 3D is probably the best instalment since the third one. Nevertheless, it plays like a film in a series that is ready to be laid to rest.

As a "conclusion" to the original run of movies, Saw: The Final Chapter mostly lands with a whimper, colliding predictable fan service with goofy traps and atrocious production values.

Director Kevin Greutert offers nothing fresh to the series.

It's the same old grisly song and dance, and even the 3-D fails to breathe new life into its tired bones.

If you've been disappointed with the way the series has been going up until this point, Saw 3D isn't exactly going to change how you feel.

Saw 3D is the seventh Saw I've seen, and maybe the sickest-which is exactly what I said about Saw VI.

The series hits rock bottom with a ridiculous and completely unnecessary 3D, painful acting, an illogical mess of a plot and some of the most repellent scenes they could come up with - and it is a relief to think that this is the final chapter, or so we hope.

The final chapter at last! Really enjoyed all the Saw films, but even I'll admit the whole franchise has been milked way too much. This last installment is more of the same, surprise surprise, but most fans should be satisfied enough. It's all extremely fast-paced and doesn't stop to take a breather at all and picks up where the sixth one left us with a wounded detective Hoffman continuing his twisted games of carnage and also leaving a bloody mess behind against those who threaten to reveal his identity. Lots of gore and dismemberment fly all over the place with the help of 3D effects and with at least one of the traps making it into my top 10 there's lots to enjoy for lovers of ultraviolence. I was expecting something special when it came to the trademark twist ending but it didn't quite have the impact I was hoping for to be honest, but it was a fitting conclusion to the franchise... as long as another doesn't come along to ruin it. Not quite my favourite of the sequels but it was a worthwhile effort I thought.

A horrendous waste of time; "Saw 3D" is senseless, sloppy and, ultimately stupid.

My new boss said she just watched the first 2 or 3 of this series (and horror's her favorite genre), stating that "they're all the same". I agree, but I disagree. Each one has a plot that's slightly different from the one before (like, who's in charge, Jigsaw dies, etc.), but....this series is one of my favorites ever, because from the very first movie (which I never saw until last year), the traps, or "games" have had me hooked and I've wanted to see all the ideas they could come up with. Only one "Saw" movie has left me disappointed, but it wasn't this one!