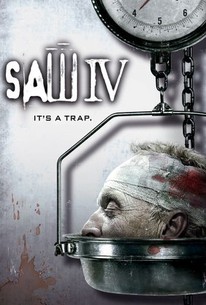 Critics Consensus: Saw IV is more disturbing than compelling, with material already seen in the prior installments.

Critics Consensus: Saw IV is more disturbing than compelling, with material already seen in the prior installments.

Critic Consensus: Saw IV is more disturbing than compelling, with material already seen in the prior installments.

Jigsaw, as well as his apprentice Amanda, have died. After hearing of Detective Kerry's murder, two veteran FBI agents, Agent Strahm and Agent Perez, assist Detective Hoffman in sorting out the remains of Jigsaw's last game. However, SWAT Team Commander Rigg has been put into a deadly game himself, and has only an hour and a half to prevail over a series of twisted, horrifying traps to save an old friend, as well as himself, from a grisly demise.

Oren Koules
as The Man

Geoffrey Pounsett
as Voice
View All

If violence is going to be your calling card, you have to make a choice: big gore or horrific exploitation. You don't get to do both.

Previously, Jigsaw and the filmmakers played fair, but too much about this latest instalment seems simply arbitrary.

The reports of torture porn's demise may have been greatly exaggerated, but this fourth entry in the mutilate-yourself-or-die series joins what may be the worst genre of the decade: the lamely ''sympathetic'' serial-killer backstory.

It's deeply unsettling; just like a horror movie should be.

Saw IV marks the point at which the franchise began feeling like every other major horror movie IP, straining itself to chug along until the box office dries up.

It was a bad movie overall, but it perfectly captured the zeitgeist of a terrible year through its awfulness. If the essence of 2007 is captured by any one film... it's "Saw IV.

After three years of tricks, Halloween 2008's treat may very well be an end to this once promising series that should have died along with Jigsaw.

Saw IV has a nice twist ending - actually three twists in one - and might be the best of the sequels.

Saw IV builds an over-elaborate game, and it's unable to escape its own game ultimately killing itself.

The first thing you see in Saw IV is Jigsaw's balls. A sign of things to come? Most definitely.

Saw IV is not for everyone, of course, since each new movie of the series is only for those who have been watching from the beginning, and the plot is now more intricate then ever and much less original, even if it also has another shocking ending.

Saw IV is a bad film to make, and I know realize they should have stopped making Saw films after the first one. The plot is very boring, after the second film I thought "oh cool, this will all be one big story," but now I realize they are running out of ideas and are now making crappy sequels just to make money, and i mean come om, I know I am stupid for just realizing this, but where the hell do they have the time to make all these torture contraptions. The cast was just plain bad and they all were not even close as good as the original Saw film, and I like them less with each Saw film I watch. The torture scenes are still really gory, and they keep to their name of being a gory film, but its seems like that the movie is completely focusing on the torture scenes. I am watching the Saw films for the first time, so i have been watching them and now I have just finished the fourth, and I can tell you right now that I liked the endings of the first three, but this ending was not even close to as surprising as those films, and I was very disappointed. Saw 4 is just another Saw film, and even though I enjoyed the first film, I really have not come to enjoy the series, and I expect the more Saw films I watch, the more disappointed I will be.

This is one of my least favourite Saw movies and that depresses me because it has a lot of good in it, yet somehow between trying to give us the history of John Kramer (Jigsaw) and keep up with the usual inovative gore fest that we know, I think this movie got a little lost along the way. It seemed hurried, overplotted and fragmented at times with a confusing ending that never really tied up any of the loose strings of the other movies, like the three before it did so splendidly. Disappointing.

Okay, let me just ask this: What the hell happened?!?!?! Seriously, this film should of never been made. Okay, let me breath for a few seconds before I continue. Alrighty. The first three films told a complete story. Simple as that. But, may I ask who decided to make a film that is not only a continuation of the third film but is actually worse? It is times like this that I wish that film companies would of just held back on making films just for money. But, at the same time, two things are taken into account with why this film turned out as bad as it did. For starters, none of the original writers of this film worked on the writing. Why? Because they were off making the mediocre and better horror film Dead Silence. Now, this film is cheap looking at the budget was not used well with this film. Now, the reason for the budget not being that good is simple: While this film was being made, another movie was borrowing the budget so it could be made. The film that was being made was Repo! The Genetic Opera (a BEYOND better film that is extremely original). So, due to a lack of budget and the original creators not even working on this film, I think it can be safe to say that this is the bastard child of the franchise. Now, lets' start with the details of this film. With direction, Bousman gives one of his worst jobs with this film and that is sad seeing as how this is the last film in the series he would be working on. My main problem is that he worried too much about the gore factor and tried to create more of a plot with the film then what there already was. Well, the end result was not, at all, pretty. Just, there was so much non-needed parts with this film that this would of been better if edited. Now for the acting. One thing that would start happening with the series that caused the main downfall would be the idea of having one person that be the victim and him or her being the ones that will have to do the killing to save themselves. Now, while this might have worked, this film was the draft for how that would of been and it is just awful. Now acting. For the most part, the acting was not at all good. I mean, yeah I know that now the series was just going for the gore factor, but this is now ridiculous and even improbable. What made me like the previous films was that those traps could actually happen in real life. In real life, you could do something like hack off your foot, be in a torture house, and could have an entire necklace with guns attached to your head. Those can happen and they added a touch of reality to the entire series. now, with this film, it is all implausible to even happen. Very disappointing. The script, same as I said: nothing at all new. Just pointless dialogue and subplots that amount to nothing but just filler. Same with the score. Overall, this film I pity due to how bad it is and how it was made. The producers and Bouseman should of looked at the film, realize that they would be spewing their names in dirt with it, and just discarded it.