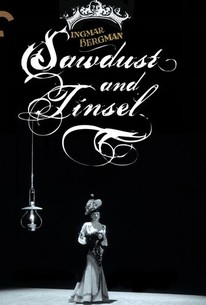 This rich, powerful Ingmar Bergman film charts the frustrations and humiliations of several circus performers. The circus's portly owner, Albert (Ake Gronberg), recalls a humiliating incident involving the company's clown, Frost (Anders Ek), who discovered his wife, Alma (Gudrun Brost), swimming nude before a band of cheering soldiers. Having concluded his recollection, Albert visits his estranged wife, Agda (Annika Tretow), who realizes that he has made little money with his circus endeavor. While Albert endures the humiliating encounter with his wife, his jealous mistress, Anne (Harriet Andersson), retaliates by yielding to a seductive local actor, Frans (Hasse Ekman), then realizes that she has been exploited and debased. Later, the drunken Frost informs Albert of Anne's sexual indiscretion, whereupon Albert determines to thrash Anne's cynical lover. In the ensuing altercation, however, Frans manages to thwart Albert's bullish attacks and deliver a series of punishing blows. Beaten and degraded, Albert ponders suicide, then decides to avenge himself on unfaithful women by killing the company's bear, beloved by the provocative Alma, whose betrayal of Frost has so haunted Albert. Following the bear's demise, the company departs to another town. Gycklarnas Afton is full of powerful performances and staggering sequences, including the legendary flashback in which Frost finds his wife cavorting nude before the soldiers. In this scene, played with almost hysterical intensity, Frost, dressed as a clown, tearfully carries his nude wife from the water, past the soldiers, and back to the circus tent. The soundtrack's jarring contrast between sheer silence and a blaring brass band, coupled with the black-and-white cinematography's emphasis on glaring sunlight, generate a mood of considerable tension and unease. This extraordinary scene ranks among Ingmar Bergman's greatest feats and readily establishes Gycklarnas Afton as an unflinching examination of the human condition.

Hanny Schedin
as Asta
View All

News & Interviews for Sawdust and Tinsel

Through Bergman’s Past, Brightly

View All Sawdust and Tinsel News

Critic Reviews for Sawdust and Tinsel

Pain and degradation follow, inevitably before the eyes of a derisive crowd.

Vsually it is a treat, with Bergman's richly baroque compositions and persistent use of deep focus brilliantly exploiting the circus and theatre settings. And the performances are first-rate.

Surreal, strange and with the pronounced despair and foreboding which would come to characterize Bergman's filmography, Sawdust and Tinsel is a harbinger of humiliation.

Not just a showcase for motifs that Bergman would use to create masterpieces later; it's a great film all by itself.

It has great performances and is a visual treat, but its masochistic storyline might not be for all tastes.

Hailed by some at the time of its release as Bergman's masterpiece, this is proof of the director's maturing visual and thematic style.

Audience Reviews for Sawdust and Tinsel

My goodness, wasn't Ingmar Bergman on fire during the 50's? While the story in Tinsel and Sawdust is less pleasant than some of his other films, focusing on the cruel side of love and the fates people are sometime locked into, he tells it beautifully, and again has a wonderful cast. A man (Åke Grönberg) has left his wife and sons for three years to lead a traveling circus from town to town. He's having an affair with the trick horseback rider (Harriet Andersson), but tensions arise when he plans to visit his wife and family. It's not a happy troupe in general - they're short of funds and costumes, and in a very artistic flashback, we see the clown (Anders Ek) humiliated by his wife, the bear-trainer, as she frolics in the nude with a bunch of soldiers, to a large regiment's delight. Anyway, as they look to borrow costumes, Andersson is hit on by an actor from a local theater (Hasse Ekman), and at first she has the upper hand and is cruel to him, but later, with the rift with Grönberg increasing, she's duped into having sex with him. Meanwhile Grönberg's wife firmly declines his offer to come back, saying she's not willing to sacrifice her peace of mind for anyone. Harriet Andersson is stunning in this film and turns in an excellent performance, and Grönberg, Ek, and Ekman are all great as well. It doesn't feel like an overly heavy film, but everyone does seem trapped, in cages I suppose like the circus bear, leading diminished, sometimes violent lives, and that seems to be one of the movie's messages. The circus ultimately keeps moving along despite all the mistakes they've made, and Bergman seems to be relating it to the human condition, one that's invariably tinged with cruelty, and sadness.

a stunning film, simple yet full of profound trails of thought and character development. by the end it's hard not to think deeply about the course of one's life, the paths we walk whether chosen or not, and the lengths we'll go to set a new course if we find ourselves drifting in the wrong direction. this film has convinced me once and for all that harriet andersson is one of the most beautiful women to ever appear in film. one of bergman's best.

A Bergman film that I had not seen but which grew on me to a large degree. It is very powerful with very griping performances. Stays with you.

I first, and probably, last saw this wonderful film over 7 years ago. It has not been easy to catch again and then I think that when the time since you have last seen a favourite gets too long you begin to have concerns as to whether it will live up to your memory of it. Having just watched it again I am blown away all over again. I cannot believe how much of the fantastic visuals I remembered and the extent to which the power of the film is still so affecting. There is not a wasted frame, this is pure cinema throughout. The acting is stupendous, the cinematography outstanding and the bitter sweet tale so seemingly simple, yet so devastatingly all consuming. I know Bergman has made more poetic films and more profound ones but I still think this one is hard to beat for so eloquently presenting those basic issues that matter to everyone.