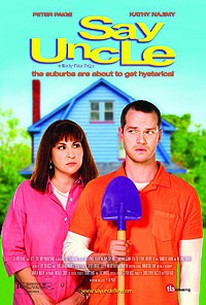 A gay artist and telemarketer with a special knack for getting along well with children discovers just how closed-minded the suburbs can be when he attempts to find happiness after losing his godson in writer/director Peter Paige's affectionate, not-so-black comedy. Paul Johnson (Paige) is a Portland-based artist and telemarketer who loves nothing more in life than the time spent with his two-year-old godson, Morgan. Upon learning that his best friends the Fabers are moving to Japan and taking their son Morgan with them, Paul wallows in a state of deep denial that ultimately results in him missing the Fabers' departing flight. Encouraged by his good friend Russell (Anthony Clark) to get out of his house and spend more time with others, Paul soon ventures out to a local playground, where he finds comfort and joy in the youthful exuberance that surrounds him. When it comes to the concept of a grown homosexual spending time with young children, not everyone in the suburbs can be so accepting, though, and as Paul attempts to find ways of keeping himself surrounded by his pint-sized pals, nosy neighbor and disapproving mother Maggie Butler (Kathy Najimy) rallies a ready army of angry soccer moms to take action and keep Paul away from the local children.

Katie O'Grady
as Mother No. 1

Ayanna Berkshire
as Mother No. 2

Sophie Schoenfeld
as Kid No. 1

Ask yourself: If you saw an unknown, single man repeatedly approach kids in the park, would you be concerned? If so, you may not find Paul, and his unbalanced Peter Pan complex, quite as charming as Paige does.

A comedy about a suspected gay pedophile is something even Mel Brooks might balk at, but Say Uncle would have benefited from his ability to turn bad taste into good feature.

As written and portrayed by Paige, his protagonist comes across a lot less like an oddball, misunderstood naif than he does an irritatingly self-absorbed loser with some serious boundary issues.

A movie that made my skin crawl.

[Peter] Paige has created an engaging and insightful entertainment with considerably more substance than most small-budget, independent gay films.

Ultimately, Paul's plight is just not that interesting, and when the neighborhood stridently turns against him, the film veers into absurdity.

Frankly, I wouldn't want him touching my toddler.

Paige's radical approach to this unsettling material tip toes in the echoes of dark absurdity. Say Uncle comes off as an irresponsible, unthinkable and creepy concoction

Paige makes a strong debut as a writer/director with this original black comedy.

Peter Paige's Say Uncle aims to be a dark comedy about the dangers of preconceived ideas, but the movie plays as a broad cartoon that speaks to the peril of having no ideas as a filmmaker.

A film that has a lot going for it, including supporting roles by the likes of Kathy Najimy and Melanie Lynskey, Say Uncle -- which lead actor/filmmaker Peter Paige mischaracterizes as a comedy -- nonetheless founders.

There are no featured audience reviews yet. Click the link below to see what others say about Say Uncle!