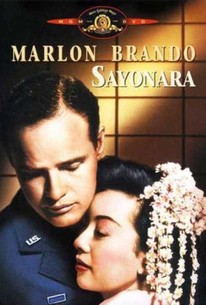 Sayonara takes its own sweet time to unfold; in so doing, it permits us to make intimate acquaintance with its characters, so as to better understand their multitextured motivations. The film is set in Japan during the Korean War. While on leave, pugnacious American soldier Red Buttons falls in love with Japanese maiden Miyoshi Umeki. Given the army's official policy against interracial marriage, Buttons is courting a court-martial. His best friend, major Marlon Brando, tries to talk Buttons out of "ruining" his life. Brando himself is about to marry Patricia Owens, the daughter of general Kent Smith. Fighting back his own prejudices, Brando agrees to be Buttons' best man at the latter's wedding to Umeki. Later, Brando himself falls for Miiko Taka, a beautiful Kabuki dancer. This sparks an all-out onslaught of racial bigotry from the Army brass, and an official edict sending American soldiers back to the states without their Japanese wives. Buttons cannot bear being parted with Umeki; as a result, the two commit suicide. The tragedy compels the army to soften its attitudes towards miscegenation. Brando is reunited with Taka, who in a parallel situation has had to ward off the inbred prejudices of her people. Nominated for ten Academy Awards, Sayonara won five, including "Best Supporting Actor" (Red Buttons, whose moribund career was revitalized herein) and "Best Supporting Actress" (Miyoshi Umeki). And yes, that is Ricardo Montalban in Japanese makeup as a Kabuki actor.

Shochiku Kagekidan Girls Revue
as Themselves
View All

Earthy and unpredictable, Brando delivered a number of superb performances during the 1950s, and one such turn can be found at the center of this excellent adaptation of James A. Michener's novel.

To be honest, Samuel Fuller's noir-tinged The Crimson Kimono, which premiered two years later, manages to be a lot sincerer, couched as it is in genre elements in its deliberation on racism involving a white and Asian couple.

A post-war exercise in re-humanizing the Japanese that can be conversely criticized for its questionable depiction of timid doll-like housewives.

Many of the glories and a few of the terrors of life in Nippon are strikingly disclosed in this long but compelling drama based on the James A. Michener novel.

I especially enjoyed the theater fantaculars and thrilled that Japan's culture was so outstandingly portrayed.

Logan's message picture about interracial marriage is made more enjoyable by the then novelty of locations shooting in Japan as well as likable performances from Marlon Brando, Red Buttons, and rest of the cast.

Engaging drama of servicemen in Japan. Top acting by all.

Brando takes a break from serious films to earn a bit of cash and some recognition in Sayonara. It lacks freshness today and likely can only be viewed as something that must be seen if you need to see the entire Brando cannon.

I saw Sayonara a long time ago after a friend recommended it to me. It is a great love story. It has some funny moments, some sad moments, some senti moments, and some very weird moments. Over all fine Movie you d want to watch again.

This is another one of those watershed films that is so far ahead of its time in dealing with issues of race, love, and marriage. Definitely one of Brando's most moving endeavors, overshadowed only by the even more masterful performances of Red Buttons and Miyoshi Umeki . This one is heartbreaking every time.