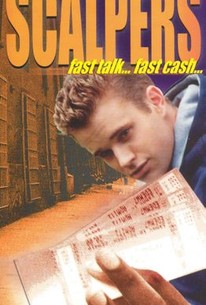 A victimless crime turns out to have deadly consequences in this drama. Joey (Steve Braun) is a young guy who finds he needs to make some big money fast when his grandmother falls ill and needs surgery. Joey falls in with a group of ticket scalpers, including wiseguy Sammy (Seun Olagunju), compulsive gambler Lou (Jeff Skinner), and Sheila (Rachel Toles), who uses her ill-gotten gains to help pay for medical school. While Joey and his new friends are breaking the law, their attitudes and techniques are fairly benign; on the other end of the scale is Freddy (Robert Huculak), a gangster with a mean streak who has built a criminal empire around scalping -- and doesn't like to share the business with anyone. While Joey and his pals try to steer clear of Freddy's crew, one of them ends up on his bad side and winds up murdered, and Joey is forced to seek revenge. Scalpers marked the feature debut for Canadian writer/director Adam Rodin.

There are no critic reviews yet for Scalpers. Keep checking Rotten Tomatoes for updates!

There are no featured reviews for Scalpers at this time.