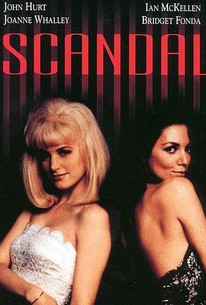 In 1963, the conservative British government was shaken to its foundations by the Profumo Scandal. The central character in this disastrous affair was John Profumo, Britain's minister of war, who had become sexually involved with call-girl Christine Keeler, whose "sponsor" was high-priced osteopath Dr. Stephen Ward. Fancying himself a dashing international adventurer, Ward had also offered Christine to alleged Soviet spy Eugene Ivanov. Another of Ward's stable, Mandy Rice-Davies, allegedly had slept with numerous British and American luminaries. The whole sordid story, which ended with Ward's suicide and Profumo's public disgrace, was recounted with relish in director Michael Caton-Jones's Scandal, which featured John Hurt as Stephen Ward, Joanne Whalley-Kilmer as Christine Keeler, Ian McKellan as Profumo, Bridget Fonda as Mandy Rice-Davies, and Jeroen Krabbe as Ivanov. In its original form, the film was ripe enough to court an X-rating; post-production trimming enabled it to squeak by with an R.

Kate Charmen
as Dancer
View All

Michael Caton-Jones' Scandal tries to recreate those muddied times for the British in a sex-laden but leaden film that's held together only by John Hurt's strong performance as Stephen Ward.

The film holds because of the brilliance of Hurt and the fascination of Whalley-Kilmer, as well as the sly, tongue-in-cheek viciousness of Bridget Fonda's Mandy Rice-Davies.

Scandal is an express tour of the Profumo affair that moves with a pop historian's revisionist swagger and plays like News of the World headlines set to early '60s rock 'n' roll.

If you're familiar with the scandal in question, this does an excellent job in unravelling what it was actually all about.

The greatest virtue of the filmmakers' straightforward approach is that it avoids the obvious pitfall of pretentiousness.

Instead of sleaze, director Caton-Jones and screenwriter Michael Thomas deliver a vindication of the affair's chief scapegoats -- Ward and Keeler -- in the form of a two-hour nostalgia trip, with some complex and powerful performances.

A quality cast, polished writing and the atmospheric evocation of Soho and Whitehall sleaze make for a powerful depiction of Ward's fall from grace.

Call it a hindsight view of British history, an unnecessarily controversial film about the uses of sex, or a perverse love story -- any of the descriptions will fit Scandal.

A well made but emotionally unengaging look at one of the most famous sex scandals of 20th century Britain.

Depicts the 1963 Profumo affair in England as an episode in class warfare.

In 1963, the conservative British government was shaken to its foundations by the Profumo Scandal. The central character in this disastrous affair was John Profumo, Britain's minister of war, who had become sexually involved with call-girl Christine Keeler, whose "sponsor" was high-priced osteopath Dr. Stephen Ward. Fancying himself a dashing international adventurer, Ward had also offered Christine to alleged Soviet spy Eugene Ivanov. Another of Ward's stable, Mandy Rice-Davies, allegedly had slept with numerous British and American luminaries. I was completely lost for words as I watched Michael Caton-Jones "Scandal". It is a fascinating and yet complex film that deserves to be in good comparison to previous rise and fall pictures such as "Goodfellas", "Casino", "Nixon" and "Bonnie & Clyde". John Hurt is very good as Stephen Ward as is Ian McKellan as Profumo. The best scene in the film is during the court room, where Keeler is seen getting sandbagged with stong questions involving the scandal. A very distraught Hurt stands up and yells out to Keeler's defence (almost a cry out to God) and says..."That is not fair!". The camera focuses intensely on Hurt's face that made me cringe with sympathy. I cringed because Stephen Ward's reptuation sank faster then the Titanic. I also found Joanne Whalley to be very good and confident as Christine Keeler, Briget Fonda gives a great performance as Mandy Rice-Davies, Ian McKellan as Defence Minister John Profumo and British singer Roland Gift (Fine Young Cannibals) as Johnny Edgecombe. "Scandal" is a great film, a fascinating one that will want me to read up more on the Profumo affair.

I think that the characters could have used more definition in places (the serious non-sexual attraction between Ward and Keeler was rather undefined and vague) but whats great is that even though the movie is 20 years old and the events occurred nearly 50 years ago its still incredibly relevant. The public both loves and hates sexualized figures, and most of that arises from our personal confusion about the whole nature of sex. Its fun, but it makes Jesus upset. The events depicted here happen today in almost the exact same fashion (only now the internet hypes these things even more out of control) and director Michael Caton-Jones recognizes that our misguided attitudes about sex are what creates the firestorm.

I haven't seen this since it first came out, but the song still haunts... http://www.youtube.com/watch?v=o8Q5CmIzpBg

Extremel;y well made if a little fanciful at times with the truth. I researched the original story after seeing this and was impressed with how damn stupid Profumo was.....good film though.