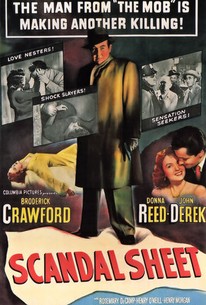 The distinctive stamp of action-film director Phil Karlson is very much in evidence in Scandal Sheet. Broderick Crawford plays tabloid editor Mark Chapman, whose burgeoning success is threatened by the arrival of his wife Charlotte (Rosemary DeCamp), whom he deserted 20 years earlier. Hoping to keep Charlotte's mouth shut, Chapman accidentally kills her. He does his best to cover his tracks, but his best is none too good, and another murder follows. Meanwhile, Chapman's star reporter Steve McCleary (John Derek) is busy investigating the still-unsolved murder of Charlotte. Though Steve holds no grudge against his boss, the same cannot be said of feature writer Julie Allison (Donna Reed), who resents Chapman's sensationalist methods. Slowly but surely, the noose tightens around Chapman's neck, thanks to the diligence of McCleary and, indirectly, the inquiries of Julie. Scandal Sheet was based on a novel by former newspaperman Samuel Fuller, an excellent film director in his own right.

Duke Watson
as Policeman
View All

... directed by Phil Karlson with a suitably sleazy atmosphere of journalistic cynicism.

As directed by "B" level film noir expert Phil Karlson, Scandal Sheet is really quite good.

Its only flaw is a mildy silly plot contrivance that allows the stunning finale, but other than that it's just about perfect.

There are no featured audience reviews yet. Click the link below to see what others say about Scandal Sheet!