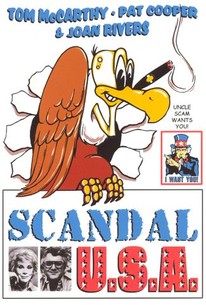 In this political comedy, F.B.I. agents try to catch criminals in the act. Instead of aiming for small-time thugs, they want to get evidence of bribery in political circles. But when they realize everyone has their hands in the cookie jar, they're not sure who they should go after first. SCANDAL U.S.A. includes Joan Rivers performing her stand-up comedy routine.

There are no critic reviews yet for Scandal USA. Keep checking Rotten Tomatoes for updates!

There are no featured reviews for Scandal USA at this time.