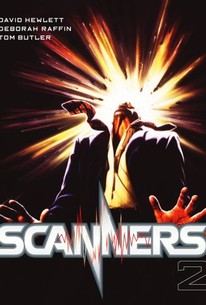 Picking up where Scanners left off, this sequel has good and evil scanners combatting when a crooked politician schemes to gain control of a major city. Scanners are people who, because their mothers had taken a certain drug during pregnancy, have acquired telepathic powers. Here, a "bad-guy" scanner escapes from a mental center and is hired by the politician to use his powers to gain control of others' minds, and then, their actions. A "good-guy" scanner teams with his sister to thwart these plans.

Anthony Ulc
as Policeman
View All

...as hit-and-miss a sensibility as one might've anticipated...

An inferior sequel with poor directing and un-impressive exploding heads! David Hewlett, who Stargate fans will recognise, is a pretty capable lead, there are a few effective sequences, and... erm, the music score was ok, I guess. I was more disappointed in this than your average sequel because the original film had so many unexplored threads and ideas, but sadly The New Order doesn't really offer anything fresh, and instead tries to predictably reference the original. This film seems much more of its time than Cronenberg's original, which had a futuristic feel. Tom Butler is a lousy bad guy, too.