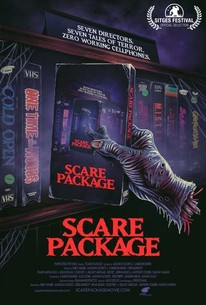 Critics Consensus: Some of its contents are more entertaining than others, but genre fans should still find this Scare Package well worth opening.

Critic Consensus: Some of its contents are more entertaining than others, but genre fans should still find this Scare Package well worth opening.

Chad Buckley is a horror aficionado, and he's lonely. Chad spends his days at his struggling genre video store arguing with his only regular customer, Sam. When an unsuspecting applicant shows up, Chad begins to teach him about the rules of horror and his video store at large, much to the chagrin of Sam. During Chad's on-boarding process, we weave in and out of different hilarious horror shorts, each one geared at a different set of horror tropes. As this new applicant learns the ropes, he begins to suspect Chad of something sinister, but we quickly learn that he may have a secret of his own.

Your mileage may vary when it comes to this sort of pandering humor, but that doesn't make Scare Package more clever or less janky.

In a time where horror anthologies are a dime-a-dozen and creativity seems to be in short supply, Scare Package is an incredibly refreshing - and bloody - alternative.

A collaboration between eight directors who all seem to possess a great deal of affection for the genre but nothing interesting or amusing to say about it.

When a movie's primary goal is to demonstrate that it's smarter than the genre's run-of-the-mill, comparison with others of its type is unavoidable.

Scare Package is a remarkably effective, solid anthology movie. The tone is fun and light-hearted... with the emphasis on gooey, crunchy, splattery gore and solid, smart jokes. ...A must-watch, horror fan or otherwise.

You've gotta love a film that is willing to be silly, and Scare Package embraces its goofy side. Any crude edges and roughness in the film only add to its charm, making it an ideal popcorn feature.'

'Scare Package' is a fun (albeit shaky) stirring of gruesome effects, dark humor and genre references.

The movie wants to recall those special fun bad movies that we all rented back in those days, things like 'Night of the Demons' and 'Monster Dog.' This approach sometimes hurts the movie... but it nonetheless has a certain charm.

This big dumb kooky ball of blood, goo, and fun is more than merely a package: it's a gift

Scare Package is made by and for hardcore-horror fans who love the genre. If seeing VHS grain over spotty gore effects makes you feel giddy, Scare Package is perfect for you.

A talented ensemble of stars in frequently hilarious and tongue-in-cheek tales subverting horror tropes and a gleeful abundance of gory practical effects.

There are no featured reviews for Scare Package at this time.