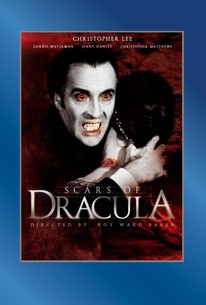 You'd think they would know better from their first glance at the foreboding stone exterior of the blood-sucking Count's castle, but apparently they didn't, for this young couple, who are looking for the young man's missing brother, walks right into Dracula's lair. Christopher Lee plays Count Dracula in this gory and violent scare-maker.

Critic Reviews for Scars of Dracula

Christopher Lee is back on form when it comes to actually getting to act... a bit. Definitely one of the better offerings anyway, so long as you're in the right mood.

Easily the most underrated of all the Dracula pictures produced by Hammer Films.

This ranks as one of Hammer's greatest ever.

A rattling collection of warmed-over ideas filmed on a paltry budget...doesn't do anything that Dracula and Prince of Darkness didn't already do better.

Yet another Chris Lee Dracula picture

Audience Reviews for Scars of Dracula

A very poor addition to the Hammer Dracula collection and you have to feel sorry for Lee. He always wanted to do his ultimate Dracula film and here at least he gets to crawl down the castle wall but apart from that (pretty dodgy) effect the rest is a rehash of previous (better) Hammer entries. Lee actually looks quite uncomfortable this time and no wonder when he has the likes of Dennis Waterman starring opposite him! The film actually starts quite well (apart from a silly rubber bat biting itself to allow Dracula to rise from the grave, I kid you not!) with Matthews as an entertaining playboy-type who, after a series of misadventures, ends up at Castle Dracula. Unfortunately when he disappears we are only left with Waterman as the heroic lead and he never pulls it off. Troughton is on hand as Dracula's assistant and at least his story is quite interesting and played with sympathy but by the end with Dracula struck by a lightening bolt and an obvious stuntman on fire you'll regret having wasted your time with this film. Stick with 'the 58 original and 'Prince of Darkness'.

A village girl found murdered, could it be that Dracula is back? Playboy Paul Carlson is about to find out. A bat hovers over a concrete slab, blood frothing from its mouth, the drops of which are reinvigorating the Prince Of Darkness. Yes, Dracula is back, bloodier than usual and even kind of chatty! Directed by Roy Ward Baker and starring Christopher Lee in his fifth outing as Dracula, Scars Of Dracula, hamstrung by low budget as it is, is one of the better efforts in the Hammer Horror Dracula cycle. Standard rules apply, buxom wenches are ripe for slaughter and the guys are a mixture of village yokels and posh gentlemen. Lee as ever is charming and carrying his air of nastiness, and the story leads us nicely to a castle top finale of some standing. There's also some nice visual flourishes and memorable scenes along the way. Blood drips onto white candles that segue into red ones and Drac walks up walls. While the redness in the piece has never more been so vivid thanks to Moray Grant's impacting photography. The cast reads like a who's who of British television, you got a Doctor Who {Patrick Troughton with the worlds scariest eyebrows}, Minder {a badly miscast Dennis Waterman}, a Bond girl and presenter of Magpie {the lovely Jenny Hanley} and Lord Melbury from Fawlty Towers {Michael Gwynn}.

Classic Hammer vampire action. When a charismatic young man gets forced into spending the night in a castle he is eventually murdered by Dracula. Things later get dangerous as the mans brother and the girl both brothers want a piece of try and find him. Their hunt eventually leads them to the castle where the lord of the undead awaits. This is probably the goriest of Christopher Lees Draculas(not that thats saying much by todays standards) but as with all Hammer horrors, this carries an element of class that made Hammer so successful. Yes, the bats are so clearly fake it looks a bit silly but Scars of Dracula is a good horror tale and carries on Draculas story well.

People who enjoy Hammer horror movies seem generally to have deemed 'Scars of Dracula' to be the poorest offering in the Hammer/Lee Dracula catalogue (1958-73), based on a paucity of originality. I would disagree and whilst the film may have more flaws than most Hammer films in terms of not so special effects, it has considerable merit and, in my view a good deal of originality. Firstly, one is struck by the peculiar physiognomy of Lee - his face drawn and ashen, almost as though he has been drained of blood, and definitely looking more like one of the undead than in previous films. In tandem with this new image, Lee carries out unprecedented acts of violence: in one maniacal scene, repeatedly stabbing one of his female cohorts with frenzied aggression when he discovers her in bed with an equally doomed guest, and in another scene, sadistically branding his man-servant (Patrick Troughton/Klove) across the back with a glowing sword, drawn from hot coals. In another scene, we find the previously mentioned guest hung like a piece of meat on a hook, which impales his chest. Such violent visuals do not, of course, necessarily add merit to the film (and Christopher Lee later commented that he deplored the violent contents of this particular sequel), but again represent an unprecedented aspect of the Dracula perennials. Possibly the most original and pleasing merit of the film is the location of Dracula's sleeping chamber and the way in which only he can access it. The chamber is set high up in the castle and can only be accessed by a window overlooking an abyss, hundreds of feet above the ground. This literally is the only access, as inside we find that there are no internal doors - only walls of stone. Drawing inspiration from the original Stoker novel, we come to see how Dracula comes and goes from his chamber, as at nightfall he emerges from the window and defies all the laws of physics by crawling up the wall to a window above. Marvellous. There is also an interesting addition where we find Dracula to have developed an ingenious defence mechanism to prevent him being staked while he slumbers. Though his eyes remain closed, the lids are superimposed by glowing red eyes which, understandably, startle and ward off the would-be 'staker'. As said, the film does have its flaws, not least in that it contains more than its fair share of Hammer hum-drum (Carpathian landlords with Cornish accents type-of-thing) and visually there is much to evoke laughter rather than fear. Rubber bats proliferate the film from start to end and the shoe-string sets also inhibit proceedings. There is one point when the 'solid stone' wall of Dracula's sleeping chamber containing the window wobbles momentarily as an intruder (who has managed to gain ingress by means of a bed-curtain hung from the window above) rushes to it, on seeing the curtain being pulled back up. And, though we are given an original demise for the Count, as he bursts into flames whilst holding an iron rail when it is struck by lightening, this sequence is itself shot down in flames as we see that the figure besieged by the inferno is clearly not Christopher Lee, but a masked stuntman. But then it is goofs like this which elicit such affection among Hammer aficionados. This film is well-deserving of a place in a horror film collection and though not great, it does have aspects which make it good.