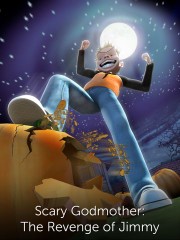 Scary Godmother: The Revenge of Jimmy

AndyTheMovieMan 2
½ May 20, 2017
Another gigantic piece of garbage I'm wasting my time even talking about these movies

Mexican D
½ September 5, 2014
A great Halloween special for kids of all ages, charming and humorous it will get you in the mood better than any other scary movie.

Taylor L
November 23, 2009
An animated Halloween movie that ends up pointless and corny. But,it entertains me all the way through and it's good old fashion halloween fun.

Bryan G
October 24, 2009
The first Scary Godmother film acted more like an introduction to all of these characters and really didn't have too much of a story. The follow-up film, Scary Godmother 2: The Revenge of Jimmy takes place the following year and mean-spirited Jimmy (Alexander Ludwig), who used to love Halloween, is now terrified of the holiday after his prank last Halloween backfired on him. His adorable little cousin Hannah Marie (Britt McKillip), who used to be afraid of monsters, is still very much friends with the welcoming bunch of monsters she accidentally discovered last Halloween.

Though I rate these two films the same, I think that The Revenge of Jimmy is a much better film than the first Scary Godmother film. The movie starts off with Harry the Werewolf (Gary Chalk) telling the story of what we are about to see, and he continues to narrate throughout the film. This isn't much of an addition, but I think it added something to the film, especially with the theme that these monsters are friendly.

The animation is a little smoother this time around. There was about a two year gap between the first film and this one, but even in that short amount of time the animators were able to make a more polished film this time around. The backgrounds are a lot better as well, and are a lot fuller and more vibrant. And the characters move with so much more life.

I also enjoyed the film's wit and charm throughout its short run. There were numerous references to other films, like Aliens and Star Wars, that were funny. I did feel a little bad that the group of kids in the film were talking about the worst candy to get on Halloween, and candy corn and liquorice were mentioned. Ever since I was little both of these have been favorites of mine, so it was a little disheartening to hear this group of kids that I enjoy watching speak so poorly of these two candies. But I won't hold that against the film.

The Scary Godmother films work perfectly when you watch them back to back. I wish that they were released together on one disc, but having to own a separate copy of each film isn't bad since I enjoy these two films so much. Much like The Halloween Tree, both Scary Godmother films are animated films that have become regular viewings for me each Halloween season.

Taylor L
October 23, 2009
An animated Halloween movie that ends up pointless and corny. But,it entertains me all the way through and it's good old fashion halloween fun.