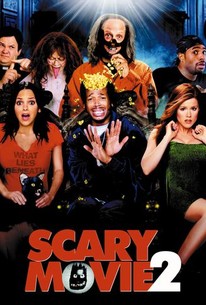 Critics Consensus: Instead of being funny, this gross-out sequel plays like a sloppy, rushed-out product.

Critics Consensus: Instead of being funny, this gross-out sequel plays like a sloppy, rushed-out product.

Critic Consensus: Instead of being funny, this gross-out sequel plays like a sloppy, rushed-out product.

This sequel to a box-office sleeper hit that spoofed teen slasher flicks takes its cues from haunted house and possession films, particularly The Haunting (1999) and The Exorcist (1973). Although many of the first film's main characters were homicide victims, Marlon Wayans, Shawn Wayans, and Anna Faris return anyway to "re-possess" their roles for this follow-up in which four students are invited by their professor (Tim Curry) to his haunted mansion, Hell House, for a weekend sleep-deprivation study. Providing the sleep deprivation, however, is a series of murderous, supernatural goings-on. Scary Movie 2 co-stars Tori Spelling, Andy Richter, Christopher Masterson, Kathleen Robertson, James Woods, Chris Elliott, and Natasha Lyonne.

Tim Curry
as Profesor, The Professor

Scarily awful -- this spoof horror franchise needs a stake driven through its heart, and quick...

It shows no understanding of or insight into the genre it's attempting to parody, nor indeed of cinema in general.

If you haven't seen the target film, not only is it not funny, it becomes totally pointless.

An act of nose-thumbing that never quite figures out how, or even where, to position its thumb.

Scary Movie 2 is indefensible on every artistic and comedic level... yet I will still stand up for its fans.

Nostalgia can only do so much. Scary Movie 2 is merely a handful of sketches threaded together without any semblance of a plot.

Faris and Hall are the MVPs of this rushed production that aims for parody, but winds up being a big mess. If you like broad, offensive humour, there are some laughs to be found here, but the jokes miss far more often than they hit.

Perhaps if you send them a stamped, self-addressed envelope they'll tell us why this was thought to be funny.

We can only hope this excrement masquerading as humor will bury the gross-out genre once and for all.

What is most awful about this crass, disgusting and vulgar atrocity of a sequel - written by a thousand incompetent writers - is not that it thinks that a bad horror movie like The Haunting should be spoofed, but that it doesn't manage the most important: to be funny.

Absolutely terrible. A complete remake rather than a sequel with the same jokes and situations around a different not very well thought out story. It's dumb that they kept the same characters who died in the last movie and simply not something I'd watch again.

I remember thinking Scary Movie 2 was absolutely hilarious when I was fifteen. And I still find it funny enough to watch without getting bored, even though the biggest gags don't seem quite as amusing anymore and the jokes that miss are absolutely horrible. The humor is incredibly broad, crude, and childish, as everything is lampooned and referenced from Charlie's Angels to The Matrix to The Exorcist to Nike commercials. I think this is still the best entry in the spoof movie "renaissance" that the original Scary Movie spawned....for whatever that's worth.