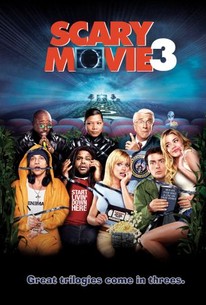 Critics Consensus: Though an improvement over the second Scary Movie, the laughs are still inconsistent.

Critics Consensus: Though an improvement over the second Scary Movie, the laughs are still inconsistent.

Critic Consensus: Though an improvement over the second Scary Movie, the laughs are still inconsistent.

While star Anna Faris returns for the third film in the Scary Movie series, the power behind the camera has shifted from the Wayans brothers to one of the Zucker brothers. The Zucker in question is David Zucker, and he's brought along his partner in movie-parody crime, Leslie Nielsen. This time around, aim is taken at such horror blockbusters as Signs and The Ring, while films of other genres, including Independence Day, 8 Mile, and The Matrix, are also lampooned. The plot finds Cindy (Faris) trying to help the president (Nielsen) thwart an alien attack while also facing crop circles and a mysterious video tape. In the spirit of the two Matrix sequels, Scary Movie 3 was shot back-to-back with Scary Movie 4. Queen Latifah, Charlie Sheen, and Eddie Griffin also star. ~ Matthew Tobey, Rovi

George Carlin
as The Architect

Dame Lee
as Rapper No.1

Doron Bell Jr.
as Rapper No.2

Jim Bremner
as Guy in Chair

Troy Yorke
as Alien No.1

Marco Soriano
as Alien No.2

Cliff Solomon
as Native American No.1

Byron Chief-Moon
as Native American No.2

Dolly Madsen
as Native American No.3

Simon Cowell
as Himself

Fat Joe
as Himself

Master P
as Himself

Macy Gray
as Herself

U-God
as Himself
View All

The first one was original, the second was still funny, but the third installment is on autopilot.

Just middling funny, with no truly memorable high points and a sum impact that goes poof! before you've left the parking garage.

Basically, any movie that suffers from a lack of Charlie Sheen has got problems.

Zucker's slapstick may have the satiric delicacy of a chainsaw lobotomy, but it hasn't harmed the franchise.

This is not one of those occasions when you feel like giving Zucker an even break.

Scary Movie 3 is even funnier than the first two.

It's better than the second film...

Be afraid, be very afraid.

As with Scary Movie parts one and two, you pays your money, you gets your laughs, and you won't remember a thing in a few months.

Fun, stupid stuff with no sense of a narrative arc or plot structure ... but hey, it made me laugh anyway.

This is just a stab in the dark, the wildest of guesses on my part, but I don't think Michael Jackson would recommend "Scary Movie 3."

So much better than the second but in no way as good at the first, the jokes are a lot more original with several funny moments especially with the boy. Leslie Nielsen was a brilliant add to the series.

Scary Movie 3 is the third uninspired entry of the Scary Movie franchise. With this third film, the filmmakers have clearly run out of ideas, and wrote this horrid mess of a "comedy". This film is unfunny, stupid and above all, a total waste of time. This has some awful jokes, bad acting, and the failed attempt at "humor" feels forced, unnatural and strained. The actors themselves seemed bored, and not involved in the film. How can they? This third entry plainly sucks. The gags are very bad, and the film tries too hard at being an effective parody, but it's not. This film is really the start at where parody films started being very bad. I found the film to be very stupid, and awful. I hated this third film, and considering I liked the first two, I was very disappointed in what I saw in this film. Spoof films aren't funny anymore, and Scary Movie 3 and 4 along with Date Movie, Epic Movie, Meet the Spartans proves it. Scary Movie 3 is a disappointing and very bad film that you're not missing out on. Watch the first two Scary Movie films, as they do provide a few laughs, but skip on this one and the fourth film. This film is a painful attempt at comedy, and doesn't do anything interesting on-screen. Skip it; you'll be glad you did.

Scary Movie 3 is a hilarious film and is a good comedy, but the problem is that it just feels that now they are trying a little TOO hard to be stupid. The storyline is funny, and a great spoof. The cast is ok, the little boy and Charlie Sheen were hilarious, but Anna Farris is getting old. The jokes are great, but when I laughed I felt kind of stupid for laughing, is that wrong? Oh well, if you want a good spoof, watch this, if you actually wanna see a great spoof watch the first one.