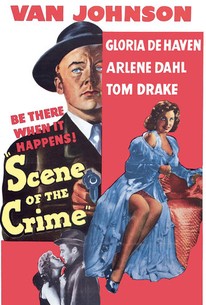 Scene of the Crime Photos

The Dore Schary regime at MGM brought a much-needed dose of stark realism to the venerable studio. Van Johnson sheds his boy-next-door image to play L.A. plainclothes lieutenant Mike Conovan. Determined to bring a cop killer to justice, Conovan will let no man stand in his way -- not even his level-headed superiors. The detective's single-purposed pursuit causes a rift in his marriage to wife Gloria (Arlene Dahl). The film comes very close to the Dragnet school of unadorned, unglamorized police procedure: it adheres to standard MGM formula only in the final reconciliation scene. Officially a Harry Rapf production, Scene of the Crime was completed by another producer when Rapf died during filming.

Forrest Taylor
as Captain of Detectives

Gladys Blake
as Voice on tape

Jimmie Dundee
as Captain of Waiters

Cameron A. Grant
as Fighter

Jimmy Dundee
as Captain of Waiters

Mack Chandler
as Man on table

Jeffrey Sayre
as Manager of the Fol De Rol

Critic Reviews for Scene of the Crime

"Scene of the Crime" is full of familiar faces from the movies of decades past. It's not all that exciting. But, it's worth a look, if for no other reason, than to see Gloria DeHaven's smoky performance.

One of the few film noirs attempted by MGM.

Audience Reviews for Scene of the Crime

Johnson buries his boyishness and gives a decent performance as a tough cop in this obscure noir, he's no Bob Mitchum or Dick Powell but he gets the job done. He's surrounded by a quality cast also turning in good work. Worth a look.

Scene of the Crime Quotes