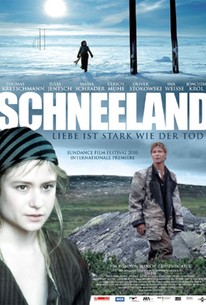 Following in the footsteps of The Weight of Water and other recent films, Hans W. Geissendorfer's arthouse drama Snowland (AKA Schneeland, 2004) juxtaposes stories set in two different time frames. In contemporary Sweden, Elisabeth (Maria Schrader), a young wife and mother, learns that her husband was just killed in an automobile accident. Grief-stricken beyond the point of consolation, she shuttles the kids off to a relative's house, climbs into the car with plans to end her life, and drives headfirst into a blinding snowstorm, where her car breaks down and she makes her way to a nearby cabin for help. Upon discovering that the building's only resident has frozen to death, Elisabeth then uses various items located in the house to reconstruct the story of the woman's life. The film then flashes back to 1937, when Ina (Julia Jentsch), a young woman, found herself entrapped by the incestuous domination of her bastard father, Knovel (Ulrich Muhe). When a handsome and slightly enigmatic young stranger named Aron (Thomas Kretschmann) arrived and moved into the home of a neighboring couple, Salomon and Helga (Oliver Stokowski and Ina Weisse), Elisabeth fell hopelessly for him - little realizing that Helga also had romantic designs on the new arrival. Step by step, piece by piece, Elisabeth gains insights from the story into the problems plaguing her own life, and much-needed wisdom that will ultimately help her survive. ~ Nathan Southern, Rovi

Joachim Król
as Rubert
View All

There are no critic reviews yet for Schneeland (Snowland). Keep checking Rotten Tomatoes for updates!

There are no featured reviews for Schneeland (Snowland) at this time.