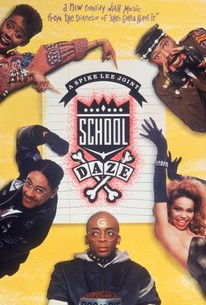 Much of School Daze is based on director Spike Lee's experiences while a student at Morehouse College in Atlanta. Laurence Fishburne plays what amounts to Lee's alter ego: a serious, self-involved student who tilts at such windmills as an insensitive administration and a deeply entrenched, social-climbing fraternity/sorority system. An inordinate amount of tension exists between the light- and dark-skinned African-American students; the lighter blacks are nicknamed "Wannabes," a reference to their emulation of upper-class white values, while the darker ones are labelled "Jigaboos." Characteristically, Spike Lee reserves a meaty supporting role for himself. He plays Half-Pint, a mixed-up freshman who willingly endures the basest of humiliations in order to be accepted by the "Wannabe" fraternity.

John Keith
as Singer at Coronation

Lee has a small, intimate talent; here, he goes for the big podium and blows it.

The film's central argument is that black matriculation is undercut by internal divisions.

For every tough-minded confrontation between the different student factions, School Daze is apt to offer a love scene less than vital to the plot, or an overlong musical scene whose effect is that of treading water.

Spike Lee had something in mind while he shot School Daze, his follow-up to the cult hit She's Gotta Have It. Unfortunately it's still lodged behind his cranium.

School Daze, with its pompous patchwork plot, is an arrogant, humorless, sexist mess.

Although the film has big structural problems and leaves a lot of loose ends, there was never a moment when it didn't absorb me.

There are some technical issues that Spike brings into films...I enjoyed the conversations that came from this movie...but as a standalone film, it was boring at times.

What a great launching pad for a lot of different actors...it's a movie that gets the conversation going, and I really liked the musical scene.

The sexist language and images in the film are tedious and predictable.

School Daze is a college musical comedy with a conscience; beneath the hijinks lies a bleeding heart for those suffering under apartheid in South Africa.

In practice Lee doesn't quite handle this vertiginous tone switch.

Some truly funny scenes and pretty entertaining song-and-dance numbers. But just too slow -- it was about half an hour too long.

This is producer/writer/director/co-star Spike Lee's sophmore effort: a musical dramedy set at a HBCU (historically black college or university) over the course of homecoming weekend. What I found so engaging about the film is that it never once shows the perspective of white people, and instead looks at various issues (primarily black on black discrimination) solely from various and well rounded African American povs. The film is somewhat dated with specific issues, but the overall messages are still powerful and relevant. I like musicals, but I don't know if that was really a good way to present this material. That, and only one of the numbers really grabbed me. I will say that the stomp competition sequence was well choreographed and executed though. The performances are good, and you can see Lee's innovations and techniques getting better and better, but the film is a little weak structurally and leaves a few too many loose ends. However, it is entertaining, and makes some important contributions cinematically (but most culturally and socially), so I say give it a chance. It's not too bad.

I think the main problem with this movie is that it doesn't have a wide enough audience. It's audience is pretty much just African Americans who went to college and were in a fraternity around the time the movie takes place. It's very specific and hard to relate to. The actors were very good, but that's all I liked about this movie. The story goes nowhere, and the song and dance numbers annoy me. Overall, I wouldn't recommend it unless you can relate to it.

It's a truly unique breed of film. It's not quite a comedy or a drama or a coming of age story, but a collaboration of the three. Spike Lee shows that not all college oriented films are dim witted and meaningless, but that they can have emotional backing and character development. Laurence Fishburne gives one of his better performances and shows a quality that I've rarely seen before in his work, vulnerability. One of the things that I love about the movie is that it pokes fun at some other movies where there are 2 opposing groups that are of the same race such as Grease(there's a great little musical number in it that mocks the style of it).