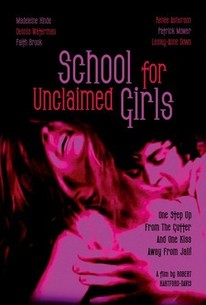 Nicki (Madeline Hinde) is a troubled teenage girl who feels guilty about her father's death. Her mother Anne (Renee Asherson) is a lonely woman who falls for opportunistic loafer Harry (Patrick Mower). When Harry tries to rape Nicki, she stabs him with a pair of scissors. Nicki is sent to a home for wayward girls where she becomes even more withdrawn. She is seduced by a lesbian and the two manage to escape the facility. They take temporary refuge with an old boyfriend and remain wanted criminals in this routine melodrama. ~ Dan Pavlides, Rovi

There are no critic reviews yet for School for Unclaimed Girls. Keep checking Rotten Tomatoes for updates!

There are no featured reviews for School for Unclaimed Girls at this time.