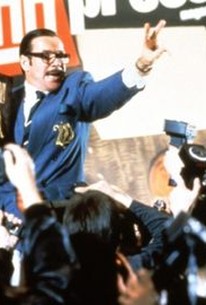 In this slapstick satire, Fritz is a life-long forger of Nazi memorabilia. He got his start as a boy, selling items of clothing as something Hitler wore. His current income-generating scam is to sell "original" portraits by Hitler of his mistress Eva Braun to connoisseurs of Nazi art. He runs into an ambitious journalist who works for a tabloid-style magazine (a thinly disguised "Der Stern"), and the two of them concoct a scam which will garner headlines for the journalist and plenty of cash for the forger. With some care, Fritz creates "Hitler's Diaries," and his creations become a household word before the scam is uncovered. Film buffs may recognize the title of this film as a term Charlie Chaplin used in The Great Dictator to refer to Hitler. This satire hews pretty closely to the actual news story it is based on, but the movie plays it strictly for laughs, a tactic which won great popularity for it in Germany.

Fritz Lichtenhahn
as Valuer in Suisse

There are no critic reviews yet for Schtonk!. Keep checking Rotten Tomatoes for updates!

There are no featured reviews for Schtonk! at this time.