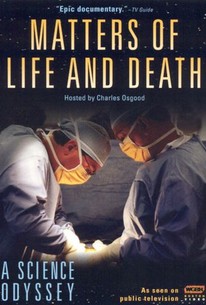 This documentary is the first in a series of five films on the history of scientific advancements in various disciplines. The film is narrated by Charles Osgood, who broadcasts on public radio and hosts Sunday Morning on television. This segment explores the incredible advances made in medical practice and technology. There are people alive today who remember chloroform as anesthesia. This fact exemplifies the contrast between what was standard in medical practice a few decades ago and the techniques of today. Many deadly diseases have been eradicated through inoculation. The film explores the radical changes that have developed in the medical treatment of the human community.

Critic Reviews for A Science Odyssey

There are no critic reviews yet for A Science Odyssey. Keep checking Rotten Tomatoes for updates!

There are no featured reviews for A Science Odyssey at this time.