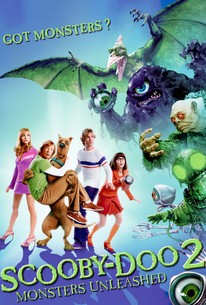 Critics Consensus: Only the very young will get the most out of this silly trifle.

Critics Consensus: Only the very young will get the most out of this silly trifle.

Critic Consensus: Only the very young will get the most out of this silly trifle.

Scooby and the gang lose their cool--and their stellar reputation--when an anonymous masked villain wreaks mayhem on the city of Coolsville with a monster machine that re-creates classic Mystery Inc. foes like: The Pterodactyl Ghost, The Black Knight and The 10,000 Volt Ghost. Under pressure from relentless reporter Heather Jasper-Howe and the terrified citizens of Coolsville, the gang launches an investigation into the mysterious monster outbreak that leaves Shaggy and Scooby questioning their roles in Mystery Inc. The ever-ravenous duo, determined to prove they're great detectives, don a series of far-out disguises in their search for clues. Meanwhile, brainy Velma becomes smitten with a key suspect, Coolsonian Museum curator Patrick Wisely, as macho leader Fred and image-conscious Daphne attempt to determine the identity of the Evil Masked Figure who is unleashing the monsters in an attempt to take over Coolsville.

Ruben Studdard
as Himself

Andrew Jackson
as Man in Car

Bradley Gosnell
as kid on bike #1

Calum Worthy
as kid on bike #2

Mark Burgess
as men in suit

Kwesi Ameyaw
as men in suit

Tazmanian Devil
as himself

Richard O'Sullivan
as Dancer
View All

Milder than the 1st, but not Scooby-snack worthy.

Well, I am now quite positive pigs have started earning their wings and Beelzebub is down in Hades having a snowball fight for the impossible just happened: I sort of liked Scooby-Doo 2.

It's all a terrible bore.

It's a terrible movie. The laughs aren't there. The stunts are stupid. There's no plot whatsoever.

The monsters are the highlight of the film, and if history is any guide, there will be more ghosts and evildoers for our wholesome heroes to battle in Scooby-Doo 3.

As little as there is to recommend in Scooby-Doo 2, it must be noted that the human cast has done an uncanny job of inhabiting their two-dimensional characters, especially Lillard.

I can't say that I'm hoping for a long series of these films, but I've seen far worse sequels than this one.

Scooby Doo 2 is loud and colorful and does have Matthew Lillard doing an impressive impersonation of Scoobys best pal Shaggy, but theres really not much else going on.

Those paying attention will note that Linda Cardellini comes close to stealing the whole movie out from under her costars.

I don't see how anyone, even Scooby Doo fans, could really find anything worth even remotely liking with this movie.

You could pass on both Scooby Doo films unless you really have nothing else to do one day. And I mean nothing.

now this movie is a masterpiece when it comes to sequels, acting, comedy, and effects, as with all movies to me and ive said this multiple times, the more villains the better the movie is mainly because the villains are the best parts of any movie and when there are multiple villains it just multiplies the awesomeness and comedy in the film

Pretty much the same thing here with more nasty looking CGI and even more terrible looking general effects, sets, stunts and obvious stunt doubles. The cast perform a little better here, more of a natural flow with this one, they gel better and actually come across as 'Mystery Inc.' with more success than the previous film. There is still a heavy load of very childish toilet humour going on throughout unsurprisingly. This still isn't required as it wasn't anywhere to be seen in the original cartoon so I have no idea why the powers that be seem to think its necessary. On the plus side its nice to see a few ghosts and ghouls from the original cartoon used for the plot, always did like that deep sea diver ghost. This is the films only plus point, despite relying heavily on CGI as per usual it was nice to see these old spirits. There were some live action costumes used combined with CGI which didn't come off too badly admittedly. This did give a nice light-hearted ghoulish 'Casper' vibe which saves the film from total ruination. The quality does vary a lot though, some ghosts look quite eerie and well realised, whilst others looks down right puerile and highly fake. So the inclusion of a nice array of phantoms and spooks slightly elevates this above the first film but its still quite awful. Not as many cameos but still plenty of unnecessary pop culture and some God awful music tracks. Again, stick to the original cartoon for all you're haunting needs.

Mixing fun, wacky moments with some fun one-liners and decent thrills in this fun family film. This is a shamelessly formulaic live-action sequel with cheesy special effects as well as Scooby-Doo's hilarious like the following Hanna-Barbera TV cartoon series. Pop songs, dancing and supporting stars Alicia Siliverstone and Seth Green are highlights.