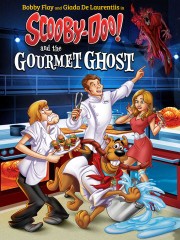 Scooby Doo and the Gourmet Ghost

The Gorilla T
February 24, 2019
an uninspired celebrity crossover movie that falls short of the fun and excitement of Scooby Doo

Jack W
September 26, 2018
So, Warner Bros. has had Scooby-Doo team up with the likes of Kiss and the WWE. Now, comes the oddest team-up yet: celebrity TV chefs. Yeah, it makes sense in that Scooby and Shaggy love food, but I'm doubting that most kids will know the names of Bobby Flay and Giada de Laurentiis.

The film is a bit of a mixed bag. And maybe I'm being a little generous in the rating, but ultimately Scooby-Doo! and the Gourmet Ghost entertained more than it didn't.

At times, the exposition can be rather slow. A lot of the quirky moments with the supporting cast don't land. Flay and Laurentiis aren't the best voice actors. Also, Scooby and Shaggy's quest for food comes across as a little selfish.

However, the movie is also often pretty funny and clever. Though the celebrity chefs don't have the greatest delivery, they don't sabotage their jokes and have some pretty good ones. Most of the flaws are in the first two acts. The third act really flows since all the backstory and characters have been set up. Also, the actual mystery itself is decent.

Like most of the recent made-for-video Scooby movies, the animation looks really nice, especially considering it's not big budget, with it's bright colors and clean, thick line work. The opening credits aren't half bad either, showing the passage of time of a colonial house as it passes through the years.

Yeah, this isn't the strongest Scooby movie. There are others you can get for your kids first. But if you're a big Scooby fan in general, then this film will probably still be worth your time.

Sabalom G
September 11, 2018
Shaggy and scooby meet the food network and the ghost have no chance against these gastronomical power house as they eat their way through the culinary world. Add in Colonial History, Celebrity Chefs and it's a romp. But who the is Skip Taylor? He was massively annoying. And Sous Chef Sue I think must be a take on Anne Burrell. Good fun for foodies.
Page 1 of 1