Scooby-Doo! Music of the Vampire2012 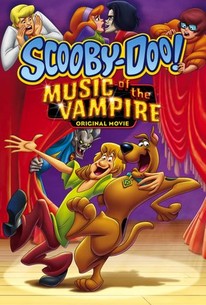 Scooby-Doo! Music of the Vampire Photos

Scooby and the gang have their first musical mystery in Scooby Doo: Song of the Vampire. It begins when they take a sing-a-long road trip into bayou country to attend the Vampire-Palooza Festival an outdoor fair dedicated to all things Draculian. At first it looks as if they're in for some fun and lots of Southern snacks, but events soon turn scary when a real live vampire comes to life, bursts from his coffin and threatens all the townsfolk. On top of that, this baritone blood sucker seems intent on taking Daphne as his vampire bride! Could the vampire be a descendant of a famous vampire hunter who is trying to sell his book? Or perhaps he's the local politician, who has been trying to make his name in the press by attacking the vampires as downright unwholesome. The answers are to be found in a final song-filled showdown in the swamp in which our heroes unmask one of their most macabre monsters yet.

Christian Campbell
as Voice
View All

Critic Reviews for Scooby-Doo! Music of the Vampire

Vampire musical is funny but has iffy themes.

Audience Reviews for Scooby-Doo! Music of the Vampire

A sub-par entry in the Scoobsters catalogue sees the Mystery Inc crew become embroiled in vampirism in Louisiana. Fun is poked at "Twilight" but the laughs are few and far between. There are a lot more musical numbers than is the norm and the songs are thoroughly bland. Back to basics please for the next outing.

Scooby-Doo! Music of the Vampire Quotes