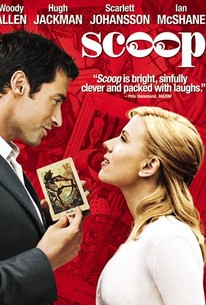 The late U.K. journalist Joe Strombel is being mourned by his colleagues--even as, stuck in limbo, Joe remains committed to pursuing a hot tip on the identity of "the Tarot Card Killer" at large in London. But, how can his legwork get done now? Via the very much alive Sondra Pransky. Sondra is an American journalism student visiting friends in London. During a stage performance by another American, magician Sid Waterman, Sondra is shocked to find herself able to see and hear Joe. From beyond, he gives her the scoop of a lifetime and urges her to pursue it. Sondra immediately starts chasing the big story, enlisting the aid of a reluctant Sid. That chase leads right to handsome British aristocrat Peter Lyman. Soon, Sondra finds that the romance of her life may well be the dangerous scoop she's looking for.

Robert Bathurst
as Strombel's Co-Worker No. 1

Geoff Bell
as Strombel's Co-Worker No. 2

Christopher Fulford
as Strombel's Co-Worker No. 3

Nigel Lindsay
as Strombel's Co-Worker No. 4

Doreen Mantle
as Joe's Co-Passenger No. 1

David Schneider
as Joe's Co-Passenger No. 2

Meera Syal
as Joe's Co-Passenger No. 3

Julia Deakin
as Sid's Co-Passenger No. 1

Margaret Tyzack
as Sid's Co-Passenger No. 2

Jeffrey Wickham
as Sid's Co-Passenger No. 3

Robyn Kerr
as Tinsley's Fan No. 1

Richard Stirling
as Tinsley's Fan No. 2
View All

The film is essentially a piece of nostalgia, but it swings along with an insouciance we haven't had from him in a long time.

Nestled as it is amid the clamor of the late-summer blockbusters, it's the kind of small pleasure that can make you feel intensely grateful.

Woody -- enough with the one-liners.

It's full of funny lines and clever inventions.

The result is decidedly minor Woody, and unlike Match Point, far from essential.

Scoop. It's a tired, thin, almost laughless reminder of the earlier Allen.

The big scoop on Scoop is that there really isn't one.

Scoop is lesser Woody Allen, not as good as Manhattan Murder Mystery but fun, with some amusing bits about England, death, magic and journalism.

It's funny enough to keep you from cringing, but not nearly as good as Match Point. Of course, Match Point wasn't trying to be funny either. So proceed with caution.

Last year's Match Point marked a surprising return to vital filmmaking form for Woody Allen, but that movie had the distinct advantage of not being a comedy.

Attempt by Woody to recapture the breezy newspaper comedies of the 40's. The film is okay as an homage but there is a fatal casting error at the heart of it that damages the picture. That would be Scarlett Johansson in the lead, trying to fill the kind of part that Rosalind Russell, Jean Arthur and Carole Lombard pulled off effortlessly in their prime she is overly earnest and not adept at the sort of confident yet tentative mix of emotions the role requires. In short she's trying too hard in a part that the young Diane Keaton would have been perfect in. Woody does rework his standard nebbishy role to good effect though.

Good lord...Woody Allen is so overrated. He even made Scarlett Johansson become a bad actress.

Scoop is Woody Allen's second film with Scarlett Johansson, and it's a combo rom-com/murder mystery. It's also a nice little tribute to magic, something Allen has apparently had an interest in for quite some time. Oh eyah, and there's some supernatural elements too. The story concerns the awkward but beautiful American journalism student Sondra,who is studying in England,and through some odd circumstances, comes into contact with the spirit of a recently deceased journalist. He gives her details about a scoop concerning a rash of serial killings, and his new information (if correct) could really blow the whole thign wide open and bring her much acclaim. Intrigued, Sondra enlists the help of a fellow American, a third rate magician named Sid aka The Great Splendini, to see if the dead journalist's lead, a super wealthy high society playboy really is true. While investing their possible suspect, the usual stuff of drama and comedy, like falling in love happens, creating a complex mess of lies, shenanigans, and fun. I will admit that the film isn't all that original where the muder mystery is cincerned, and it pretty much ends how you think it will, but I didn't really mind it so much, because I found it very entertaining to watch Allen and Johansson go through the motions of playing detectives. It comes off, and I mean this with the highest amount of respect and sincerity, like a neurotic cross between Scooby Doo and typical Woody Allen. The film is very light and not really all that significant, but it's quote entertaining, very fun, and well played. Allen is typical Allen, and, even though he's no longer groundbreaking with his schtick, he's still endearing. Johansson is fun and plucky as Sondra, and I can see why she's been somewhat of a potential muse for Allen over the past decade. Huge Jackman is quite good as the suave playboy Peter, but for me, I really enjoyed seeing Ian McShane as the deceased journalist Joe Strombel. His interactions in the afterlife are a joy, and it's just fun seeing him trade banter with a writer like Woody. This is a nice little romp, but it's best looked at as a lazy afternoon watch sort of thing. It would probably help if you're a diehard of someone in the cast too. Being that I am, I found the film rather agreeable, even though I wouldn't have minded something more substantial. It's got good classical music typical of Woody's films, a few sequences that are, cinematically speaking, not bad, and of course Woody's typical humor and charm. All in all, it's okay, but like I said, you probably should only see this if you're really a completist or a die hard.