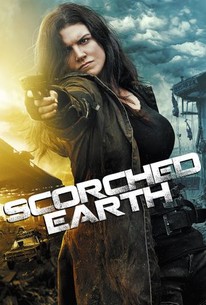 The planet has suffered an environmental collapse; the air became dangerous to breathe, the water became toxic, and billions of people died. Generations later, mankind has finally re-established a rudimentary society, in an attempt to pick up the pieces that continue to blister in the sun. Attica Gage (Gina Carano) is a bounty hunter with a chance at the bounty of a lifetime: to bring down the ruthless outlaw, Elijah Jackson. Gage infiltrates Jackson's gang, and everything is going to plan until she meets a slave girl who reminds her of her dead sister. With her loyalty to only herself now tested, Gage learns that there might be more to life than just survival.

Watching [Carano] is fun for a little bit, but seeing her talents thoroughly wasted becomes more depressing than anything else.

"Scorched Earth" is the sort of divertingly hokey post-apocalyptic B-movie that would have amused undiscriminating Blockbuster Video renters a generation ago, and now might pass muster as the pilot for a weekly SyFy series.

A decent premise - and a game Gina Carano - get left in the dust kicked up by "Scorched Earth," a dull, draggy post-apocalyptic western set in the not-too-distant, environmentally toxic future.

Post-apocalyptic westerns don't come much more lethargic and unoriginal than this B-movie.

Gina Carano wielding a crossbow in a low-budget DTV post-apocalyptic joint. That's all you need to know.

Bolstered by a strong lead performance from Carano, great action set pieces, and impressive world-building, this is one action-thriller that delivers on both of those fronts.

Gina Carano roams a mild yet tedious postapocalyptic wasteland as a bounty hunter, and either you are here for this lady badass of our feminazi dreams, or you are not.

[T]here's so much more the screenplay by Kevin Leeson and Bobby Mort could be doing with this world.

The result is a film that plainly falls short of its goals.

Howitt loses the battle with his limited budget and inexperience with B-movie ruin, keeping the end of the world flavorless, anticlimactic, and wasteful with the few good ideas that pop up as the story unfolds.

Hell, for Gina Carano, would be a film future of no-budget D-grade sci-fi like this

There are no featured audience reviews yet. Click the link below to see what others say about Scorched Earth!